Items related to The Jennifer Morgue: Book 2 in The Laundry Files

Stross, Charles The Jennifer Morgue: Book 2 in The Laundry Files

The Jennifer Morgue: Book 2 in The Laundry Files 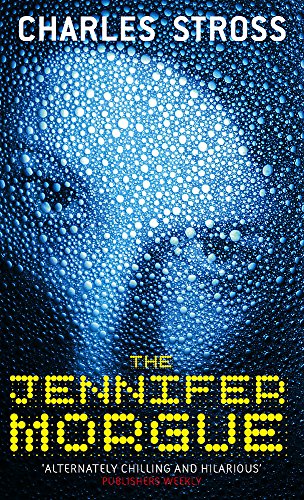 Bob Howard is a computer übergeek employed by the Laundry, a secret British agency assigned to clean up incursions from other realities caused by the inadvertent manipulation of complex mathematical equations: in other words, magic.

In 1975, the CIA used Howard Hughes's Glomar Explorer in a bungled attempt to raise a sunken Soviet submarine in order to access the Jennifer Morgue, an occult device that allows communication with the dead. Now a ruthless billionaire intends to try again, even if by doing so he awakens the Great Old Ones, who thwarted the earlier expedition. It's up to Bob and a collection of British eccentrics even Monty Python would consider odd to stop the bad guy and save the world, while getting receipts for all expenditures or else face the most dreaded menace of all: the Laundry's own auditors.

The alternately chilling and hilarious sequel to The Atrocity Archives.

Book Description Little, Brown Book Group, 2007. Paperback. Condition: Used; Acceptable. Dispatched, from the UK, within 48 hours of ordering. The book is perfectly readable and fit for use, although it shows signs of previous ownership. The spine is likely creased and the cover scuffed or slightly torn. Textbooks will typically have an amount of underlining and/or highlighting, as well as notes. If this book is over 5 years old, then please expect the pages to be yellowing or to have age spots. Aged book. Tanned pages and age spots, however, this will not interfere with reading. Damaged cover. The cover of is slightly damaged for instance a torn or bent corner. Seller Inventory # CHL5957042

5. The Jennifer Morgue: Book 2 in The Laundry Files

Book Description Paperback. Condition: Very Good. The book has been read, but is in excellent condition. Pages are intact and not marred by notes or highlighting. The spine remains undamaged. Seller Inventory # GOR001151134

6. The Jennifer Morgue: Book 2 in The Laundry Files

Book Description Paperback. Condition: Good. The book has been read but remains in clean condition. All pages are intact and the cover is intact. Some minor wear to the spine. Seller Inventory # GOR001436563

Book Description Orbit, 2007. Condition: Good. A+ Customer service! Satisfaction Guaranteed! Book is in Used-Good condition. Pages and cover are clean and intact. Used items may not include supplementary materials such as CDs or access codes. May show signs of minor shelf wear and contain limited notes and highlighting. Seller Inventory # 1841495700-2-4

Book Description Little, Brown Book Group, 2007. Paperback. Condition: Used; Good. **SHIPPED FROM UK** We believe you will be completely satisfied with our quick and reliable service. All orders are dispatched as swiftly as possible! Buy with confidence! Aloysius Ihezie. Seller Inventory # 1654236

Book Description Orbit, 2007. Paperback. Condition: VERY GOOD. Pages are intact and are not marred by notes or highlighting, but may contain a neat previous owner name. The spine remains undamaged. Seller Inventory # 1841495700_abe_vg

10. The Jennifer Morgue: Book 2 in The Laundry Files

Book Description Orbit 06/09/2007, 2007. Paperback. Condition: Very Good. Shipped within 24 hours from our UK warehouse. Clean, undamaged book with no damage to pages and minimal wear to the cover. Spine still tight, in very good condition. Remember if you are not happy, you are covered by our 100% money back guarantee. Seller Inventory # 6545-9781841495705