Items related to World Of Robert Jordan's Wheel Of Time 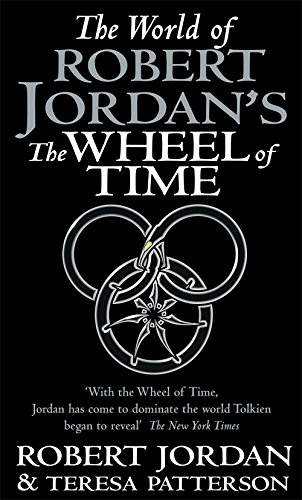 The Wheel of Time is one of the most extraordinary works of fantasy ever published - a series that has topped the international bestseller lists and is now appearing in fourteen languages.

This essential companion to The Wheel of Time is for everyone interested in the history and the background of this incredible series - never-before-told legends, previously unknown peoples and lands, exotic beasts and portents of what may come to pass.This comprehensive guide is indispensible to any fan of Robert Jordan.

Look out for more information on this book and others on the Orbit website at www.orbitbooks.co.uk

Best-selling fantasy series tend to spin off nonfiction books about their otherworld settings, such as The Atlas of Tolkien's Middle-Earth and The Discworld Companion. Robert Jordan's immense "Wheel of Time" sequence began with The Eye of the World (1990) and still continues, with eight fat novels published and more to come. This lavish companion volume first appeared in 1997 and has been repackaged at a bargain price--though not updated to cover the events of Jordan's 1998 instalment, The Path of Daggers. It goes into great detail about the saga's vast historical back-story, the interlocking systems of magic, the many countries, races, institutions, power-wielders and monsters, and much more. There are over seventy full-colour illustrations and maps. Fans of the series will appreciate this as an attractive coffee-table volume which, like Tolkien's detailed appendices in The Lord of the Rings, casts light on mysteries and trivia that didn't fit into the narrative. Newcomers may be less enchanted as Jordan's considerable talent is for storytelling and cumulative narrative power: this background material is ambitious in scope but not wildly original, featuring familiar fantasy landmarks like a Pit of Doom (and, for variety, Mountains of Doom). A must for Jordan addicts; others should try the novels first and see what the excitement's all about. --David Langford

'With the Wheel of Time, Jordan has come to dominate the world Tolkien began to reveal' NEW YORK TIMES 'A powerful vision of good and evil.' - ORSON SCOTT CARD

The World of Robert Jordan's 'Wheel of Time