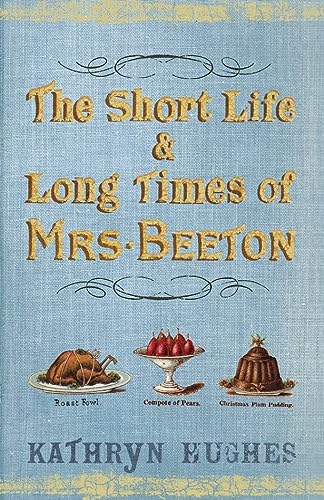 ‘This is a wonderful book, so masterful and scholarly and wise, there will never need to be another. Hughes is an elegant writer, and a capable digger; no stone, however small or inaccessible, is left unturned.' Observer

'This is a brilliant biography, which tells the absorbing, strange and sad story with great aplomb. Kathryn Hughes has seen quite rightly, that one of the most important parts of the story is what happened after Isabella's death and, indeed, Sam's, and the life of Mrs Beeton is continued to the present day. It is so magical a feat of imagination, of intricate learning lightly worn, that you know that Kathryn Hughes would write a wonderful novel. But this splendid book is as good as any.' Spectator

What drew you to Mrs Beeton?
When I was doing my PhD in Victorian history I came across the fact that she died when she was 28. Like everyone, I thought she was an elderly matron. I was staggered that a girl of my age (I was 28 at the time) had not only had four pregnancies but had written a book which made her name live for ever. I wanted to know more. Also, before starting my PhD I spent three unhappy years working as a features writer on women’s magazines. The editor would come in and say: ‘We need some cookery copy.’ Cobbling it together, I learnt that it was all in the presentation and not down to an in-depth knowledge of cookery. I realised that the fact that Mrs Beeton started out knowing nothing about cookery didn’t make her a scabby fraud, just a competent magazine journalist. We have this childlike fantasy that chefs and food writers are working in a cottage industry. But no one seriously thinks Nigella is setting her alarm to soak ingredients for three hours. Of course she employs people to help her. That doesn’t make her anything other than a professional modern cook.

Would you like to have lived in the Victorian era?
Yes, as long as I could have chosen the rank into which I was born. I would like to have been an Anglican vicar – I would have to have been a man – with some financial means, living in a nice country parish. I would like to have been in the intellectual loop, scientifically minded, probably with a good collection of ferns or butterflies. I’m absolutely certain that if I’d been born Victorian I would actually have been a governess – well-educated but not that well-funded. I would have been one of those slightly sulky governesses who wasn’t very good at joining in and was always dropping hints that I was a bit more artistic and sensitive than the bluff county squire or rich merchant I was working for.

How do you account for your fascination with the Victorian era?
My grandparents were born in the 1880s, which was kind of unusual for someone growing up in the sixties and seventies. Whereas my schoolfriends’ grandfathers fought in the Second World War, mine fought in the First. I had a sense of having a longer cultural memory than most children. Both my grandmothers had governesses and they would tell me stories about the tricks they played on them. It was like living history, that sense that you could touch it. I somehow had a living stake in the things we learnt about at school while, for the other girls, it was the olden days.

Have you tried Mrs Beeton’s recipes?
Yes. I’ve got to be honest, I got my mother to help me. They can taste a bit odd, but the puddings are great. Her blancmange, junket and tapioca are great and her rice pudding is gorgeous. I realised that all those junior school puddings are really, really nice when they are done properly.

What was it like to spend five years researching and writing about Mrs Beeton?
I quickly learnt that I was spending five years with Mr and Mrs Beeton. They are soldered together more than most Victorian couples, particularly professionally. Writing a biography is a bit like making a friend. At first you think your subject is all right. Then you get very involved in their life and they’re the most important person in your life. When you’ve finished the book it’s a bit like a friend who has moved to the country. It’s nice, but you see them nothing like as much and they slightly fade from your consciousness. Some biographers have fantasies that they are the person they are writing about reincarnated. I wouldn’t go that far; for me it’s a metaphorical reincarnation. I started to think that I – and only I – understood Mrs Beeton. I went to an academic conference about a year ago in the most intense period of writing the book. Some academic made a point about Mrs Beeton. I thought: ‘But you don’t know her. She’s my Mrs Beeton.’ It was a bit like finding out your boyfriend’s having an affair. When I stopped writing the book I became a little less weirdly over-engaged.

Why do you write?
I want people to feel that same tingle of excitement as I do when I think about the Victorian past. I want them to smell the smells and hear the noises and realise that, far from being some dim and distant time, this is actually the landscape that their grandparents knew.