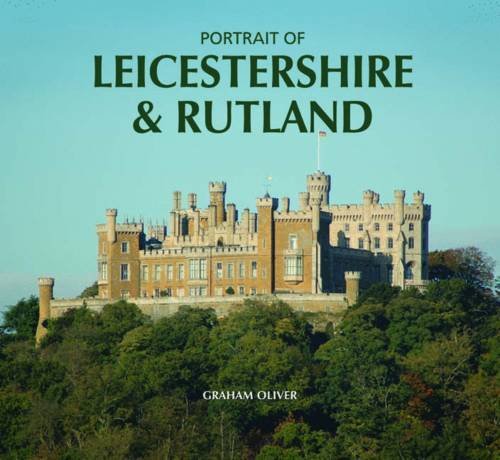 The aim of this book is to capture the well
known tourist attractions and also the less
familiar corners of both Leicestershire and
Rutland.Although often linked together,
Leicestershire and Rutland remain two separate
counties as Rutland once again was awarded
county status in 1997.
Leicestershire and Rutland are predominantly
landscapes of rolling green farmland with some
areas of higher ground, notably the Charnwood
Forest area around Beacon Hill and parts of the
newly formed National Forest around Coalville.
Within the counties are many places of great
interest including the Great Central Railway
which runs from Loughborough to Leicester
North and is the only double track, main line
heritage railway in the UK; Rutland water, a
reservoir the size of LakeWindermere, is one
of the biggest man-made lakes in Europe;The
National Space Centre, situated on the banks of
the River Soar in Leicester, is the UKs' largest
attraction dedicated to space; Foxton Locks on
the Grand Union Canal is one of the longest
flights of staircase locks in England; and Leicesters'
Diwali celebrations on Belgrave Road are the
largest in the world outside India. All these sights
are captured in the superb photography of
Graham Oliver.
Portrait of Leicestershire & Rutland is the perfect
memento.

Graham Oliver is based in Leicestershire
and has lived in the county for
over thirty years. His photographs
have featured in many newspapers
and magazines and on calendars.
Portrait of Leicestershire & Rutland is
his first book.

Book Description Halsgrove 09/04/2010, 2010. Hardcover. Condition: Very Good. Shipped within 24 hours from our UK warehouse. Clean, undamaged book with no damage to pages and minimal wear to the cover. Spine still tight, in very good condition. Remember if you are not happy, you are covered by our 100% money back guarantee. Seller Inventory # 6545-9781841149943

Book Description Hardback. Condition: Good. The book has been read but remains in clean condition. All pages are intact and the cover is intact. Some minor wear to the spine. Seller Inventory # GOR009093759

Book Description Hardback. Condition: Very Good. The book has been read, but is in excellent condition. Pages are intact and not marred by notes or highlighting. The spine remains undamaged. Seller Inventory # GOR004339021

Book Description -. Hardcover. Condition: Very Good. Portrait of Leicestershire & Rutland This book is in very good condition and will be shipped within 24 hours of ordering. The cover may have some limited signs of wear but the pages are clean, intact and the spine remains undamaged. This book has clearly been well maintained and looked after thus far. Money back guarantee if you are not satisfied. See all our books here, order more than 1 book and get discounted shipping. Seller Inventory # 7719-9781841149943