Items related to Norfolk Coast from the Air 2

Norfolk Coast from the Air 2 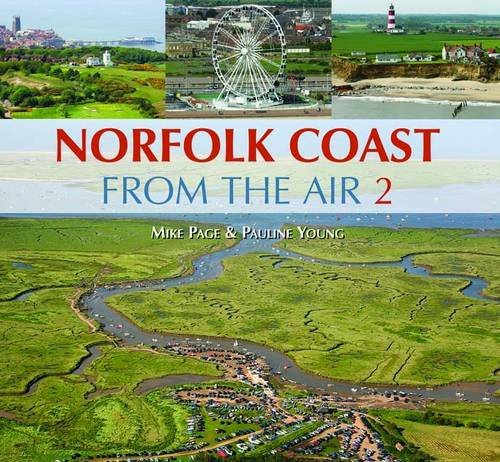 The superb aerial photographs of Mike Page have
generated a veritable library of books devoted to
Norfolk and Suffolk, each new volume being eagerly
snapped up by his increasing numbers of avid followers.
Here, following on the success of Norfolk Coast from the
Air comes a completely new set of images covering the
coast from Hopton on the Suffolk border around the
coast to TheWash.
In Norfolk Coast from the Air 2 attention is paid to the
smaller villages and to the effects of erosion that
change this coastline from year to year. The importance
of aerial photography in highlighting the perils
faced as a result of the encroaching sea is vividly
displayed in these fascinating images, with comparisons
made between those areas which have sea defenses
and those which do not.Also included are coastal
improvements such as the new outer harbour at Great
Yarmouth, the reefs at Sea Palling, and the defenses at
Horsey.The detail in these photographs also provide a
fascinating overview of this history of the coast from
the Roman settlement at Caister through to the
SecondWorldWar radar installations at Trimingham.
Along with the changes that have taken place, we are
also reminded of things that have remained much the
same.The importance of the holiday industry to this
part of Norfolk is exemplified through the holiday
parks, the magnificent beaches and the areas devoted
to the protection of wildlife.These days such things
provides the means for thousands to enjoy leisure
pursuits including watersports of all kinds, birdwatching,
or simply walking the coastal footpaths.
As a memento for visitors to these shores, or as
reminder to locals of what is best about their county,
this new book will prove to be a real treasure.

Mike Page, Gorleston-born, began his
working life as a boat builder but in
1973 in partnership with his wife
Gillian began a garage business at
Strumpshaw, east of Norwich. He's
now semi-retired which gives him
more time to pursue his flying and
photographic interests. He has a
considerable library of aerial and
wildlife prints. In addition he supplies
newspapers with newsworthy pictures
and recently has produced aerial
photographs for the Eastern Daily
Press in a series of supplements. His
first major project was a number of
videos and DVDs of the East Anglian
Coast. His first book A Broads-Eye View
also produced in partnership with
PaulineYoung, was a huge success,
followed by a string of successful
publications
Pauline Young has lived in East Anglia
for many years. She writes regularly for
magazines and is a published children's
author.

1. Norfolk Coast from the Air 2

Book Description Hardback. Condition: Very Good. The book has been read, but is in excellent condition. Pages are intact and not marred by notes or highlighting. The spine remains undamaged. Seller Inventory # GOR006176277

2. Norfolk Coast from the Air 2

Book Description Halsgrove, 2009. Hardcover. Condition: Very Good. Dust Jacket Condition: Very Good. 1st Edition. This is Norfolk Coast from the Air 2 by Page, Mike; Young, Pauline and published by Halsgrove in 2009. It is a red hardcover with titling to the spine aspect - includes dust jacket. The cover is clean and tidy with very minor bumping to corners.The dust jacket display exceptionally minor bumping to edge. The interior is neat and clean with no inscriptions. Pages 144, dimensions 24cm x 22cm x 1.8cm. Seller Inventory # 563