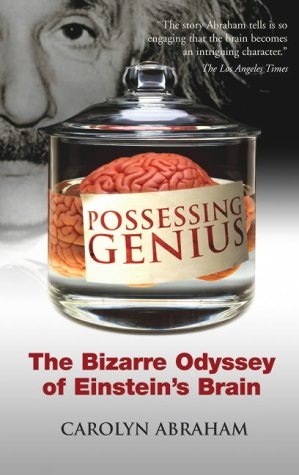 The middle finger of Galileo's right hand is on display in a museum in Florence. Napoleon's severed penis is rumoured to be in the hands, as it were, of an American urologist. And the brain of the greatest thinker of the 20th century lies in two muddy cookie jars under a box and behind a beer cooler in Wichita, Kansas.

Follow the bizarre odyssey of Albert Einstein’s brain as it roamed the world in mayonnaise jars and courier packages, in car boots and by airmail, and took over one man’s life.

In 1955 Princeton pathologist Thomas Harvey found himself dissecting the corpse of Albert Einstein. He seized the chance to salvage the great thinker’s brain, convinced it might unlock the enigma of genius. Harvey became the organ’s unlikely custodian – slicing, dicing, pickling and preserving

Possessing Genius tells this compelling story, about a scientific specimen turned into a holy relic by our rabid culture of celebrity.

"Engrossing ... Abraham details the peregrinations of what most be one the most unique organs ever submitted to scientific scrutiny." -- Vancouver Sun

"The story Abraham tells is so engaging that the brain becomes an intriguing character." -- Los Angeles Times