Items related to The Day We Bombed Switzerland: Flying with the U.S.Eighth...

The Day We Bombed Switzerland: Flying with the U.S.Eighth Army Air Force in World War II 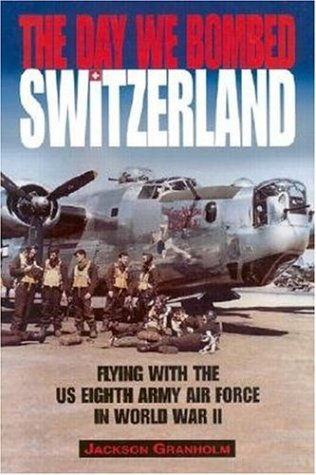 This work covers the author's military service spent flying aerial bombing combat over Europe in the 8th USAAF, stationed in England. It describes operational events and the horrors of massive daylight bombing raids over Germany and its occupied territories, from D-Day until the end of World War II in Europe. The attack on neutral Swiss territory, described in the book, was one of several during World War II by American bomber formations caused by navigational error. These events were never reported in the American press, and their attendant records were classified as top secret for many years. The author, appointed by his Air Division commanding general, undertook the court martial defence of two young flying lieutenants involved in the incident. These men led a squadron of huge B-24 bombers in a misguided attack upon Zurich.

I have told of the writing and publishing of this book.
To fly in the bomber attack forces of the 8th USAAF during World War II in England was a truly memorable experience. All who did so gained a lifelong set of remembrances. History is always important and is too easily lost to those who follow. This book represents twenty years of effort and three major rewrites in order to put it into its present form. There were a number of difficulties, including the long-time secret classification of the court martial records which form an important part of the text background material. I find it fitting that this book is published in England. It was from England, a place were we lived as foreigners, and not always beloved foreigners, that we went forth with our mighty machines of destruction to rain death upon Nazi Germany and its occupied territories. In my brief wartime days in England, I became an honorary resident of East Anglia with the culture of Norfolk to be impressed upon me for the rest of my life. And my English publishers, with whom I was able to work with mutual respect and cooperation, brought a high level of professionalism to the effort of producing this book. Little interest in publishing this book was in evidence from American publishing houses. Even less was in evidence from those styling themselves as "author's agents." I was the recipient of all kinds of asinine advice about what to do with this book. Some said there were too many characters in it, and that hence the reader could never follow it. It would be better, such said, to limit the plot to one or two and introduce a captivating, even if fictional, love interest. Other givers of free-advice-worth-the price suggested that the plot of World War II must be rewritten for more dramatic impact. The most straightforward "expert" opinion was that which said that the whole manuscript was a waste of time, and that such a mess could never be published. These latter experts had the gall to charge for this opinion. In spite of all these things, here the book is, published by my friends at Airlife. Now it can stand on its own amidst whatever storms of criticism it may deserve.

1. The Day We Bombed Switzerland: Flying with the US Eighth Army Air Force in World War II

2. The Day We Bombed Switzerland: Flying with the US Eighth Army Air Force in World War II

3. The Day We Bombed Switzerland: Flying with the US Eighth Army Air Force in World War II

5. The Day We Bombed Switzerland: Flying with the US Eighth Army Air Force in World War II