Items related to White Gold: The Inside Story Of The UK's Largest...

Eugene Costello White Gold: The Inside Story Of The UK's Largest Ever Drugs Haul

White Gold: The Inside Story Of The UK's Largest Ever Drugs Haul 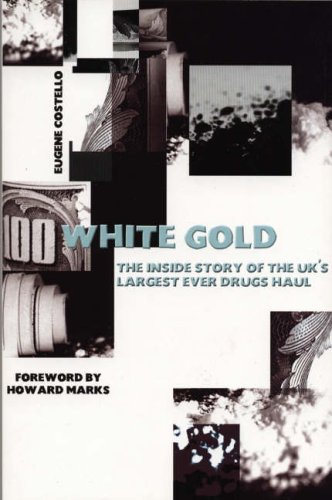 In 1989, an expatriate Scot based in Malaga offered Howarth some work over the winter delivering a yacht from Mallorca to the Costa del Sol. He agreed - and unwittingly stumbled into Operation Klondyke, Customs and Excise's biggest-ever drugs operation in Scotland. With the man referred to as 'Mr X' in the subsequent trial, Howarth was now under surveillance, unaware of the dangerous game in which he had become embroiled. The following winter, 'Mr X' offered him another job, working on a cargo ship doing sand runs between Gibraltar and Portugal. Howarth took with him a young Ullapool fisherman, Noel Hawkins. Their joy at finding work in the lean winter months turned to horror when they learned the true destination and purpose of their trip. They were en route for the coast of Venezuela to rendezvous with a jet plane that would be dropping off half a metric ton of virtually pure cocaine. Howarth and Hawkins were then to use their intimate knowledge of the Highland coast to land the gear back in Scotland - and if they did not co-operate their lives, and the lives of their families, would be in jeopardy. Thanks to an alert local policeman near Ullapool, the drugs were discovered as they were being transported to London. Incredibly, Customs and Excise initially charged the two men with supplying cannabis - until they examined the haul......

A grimly fascinating tale of a life lived on the wrong side of the tracks -- Mail on Sunday, December 2003

A thrilling tale, seen from the eyes of both the hunters and the hunted... -- Ross-Shire Journal

The story unfurls with pace, veering between outright farce, drunken violence and the chilling proximity of the truly despicable. -- Scotland On Sunday, December 21, 2003

1. White Gold: The Inside Story of the UK's Largest Ever Drugs Haul

2. White Gold: The Inside Story of the UK's Largest Ever Drugs Haul