Items related to Fairway to Heaven: Victors and Victims of Golf's... 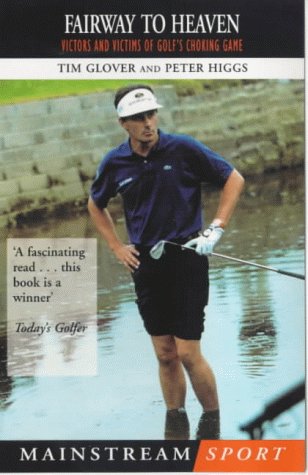 In golf, nowhere is the strain more apparent than the closing stages of a major championship. The crowd, absorbed in every shot, conveys the tension to the players, who already have their own mental battle to win. Before missing the most notorious putt in the history of the Open Championship, Doug Sanders was already thinking of which side of the gallery to turn to first for applause. His three-foot putt went awry, and in the ensuing silence, a pin could have been heard to drop. The spectators reacted as if they had just witnessed a terrible accident - in sporting terms, they had. "Fairway to Heaven" is a round-up of the greatest climaxes in the history of golf's major championships: the Open, the Masters, the US Open and the US PGA. With comments and reminiscences from some of the world's best players, who have either survived or succumbed to the pressure of the 18th, it provides a keen insight into what it feels like to choke or triumph with the eyes of the world watching.

The pinnacle of any sportsman's career is to win BIG prizes--but arguably nowhere is the mental strain greater than on the closing holes of one of golf's major championships, approaching the close of four days of intense mental and physical strain, knowing full well that one missed putt will not only lose the trophy but could also cost a few dollars into the bargain!

And this is what Fairway to Heaven is all about ... Perhaps the most notorious putt in the history of the Open Championship was that of Doug Sanders--a three-foot putt that would have given him the biggest prize in golf, a putt that any self respecting golfer would sink 101 times out of 100--yet for some reason he missed it. When asked about the "putt" some years later, Sanders is reputed to have said: "It doesn't bother me, I sometimes go five minutes without thinking about it".

Fairway to Heaven is packed with such moments ... the glorious moments for the victorious, the ignominy of failure for those that lose. Some learn to ride it, but others are scarred for life; some don't even survive.

This book highlights some of the great moments of drama from the four majors--the Open, the Masters, the US Open and the US PGA. Who will ever forget Sandy Lyle's magnificent shot from the bunker followed by a great putt for a birdie? If your memory is a little bit hazy, this book will refresh it. Not only will you read of Lyle's great moment, but many more moments from one of the toughest games invented; a game where the intense pressure is increased by the gallery who are absorbed by every shot and convey even greater tension to the players.

Fairway to Heaven won't teach you how to play better golf, but it is immensely interesting and gives you an insight into the greatest players' minds, as well a taste of their thoughts at "that moment". We've all had such moments, but they don't usually don't cost us more than a couple of quid! A great book for the armchair competitor --Ben Naylor