Items related to My Sentiments Exactly 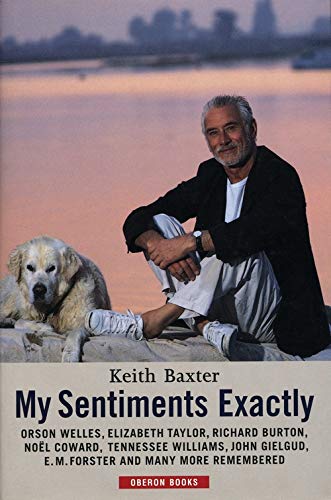 Award-winning actor, director and playwright Keith Baxter's absorbing and often hilarious memoires of working with the greats. Crammed with professional insights and behind-the-scenes anecdotes, Baxter retraces friendships through 40 years in the business from his first big break when he was cast by Orson Welles as Prince Hal in Chimes at Midnight to working with Elizabeth Taylor and other greats.

Keith Baxter's first major success was playing Prince Hal in Orson Welles's version of Shakespeare's Henry IV plays, Chimes at Midnight, later a celebrated film withWelles himself playing Falstaff and John Gielgud as King Henry. Many more starring roles followed in the West End and on Broadway, including Sleuth, with Anthony Quayle, A Man for All Seasons opposite Paul Scofield and Private Lives with Joan Collins. His film also include Ash Wednesday starring Elizabeth Taylor. A close friend of Tennessee Williams, he directed the first London production of William's The Red Devil Battery Sign, in which he also starred. In a career spanning 40 years he has worked with many of the great actors of our times. His original plays include Cavell, 56 Duncan Terrace and Barnaby and the Old Boys.