Mortimer & Whitehouse: Gone Fishing: The perfect gift for this Christmas 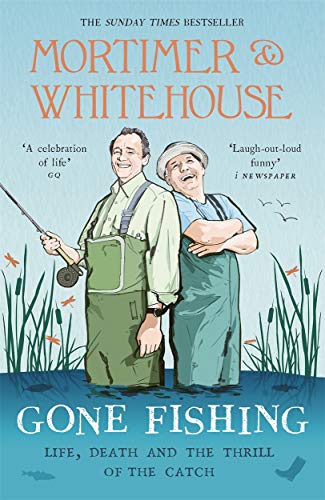 Bob Mortimer and Paul Whitehouse have been friends for 30 years, but when life intervened, what was once a joyous and spontaneous friendship dwindled to the odd phone call or occasional catch up. Then, Glory Be! They were both diagnosed with heart disease and realised that time is short. They'd better spend it fishing...

So they dusted off their kits, chucked on their waders and ventured into the achingly beautiful British countryside to fish, rediscover the joys of their friendship and ruminate on some of life's most profound questions, such as: How did we get so old? Where are all the fish? What are your favourite pocket meats? What should we do if we find a corpse?

Following the success of the BBC's Mortimer & Whitehouse: Gone Fishing series, this wonderful book by two lifelong friends is a love letter to the joys of angling, the thrill of the catch and the virtue of having a right daft laff with your mates. On the fish, the equipment, the food, and the locations, Gone Fishing is the perfect book for fans of Bob Mortimer, Paul Whitehouse and for anyone who wants to read a brilliantly written and endlessly funny joint memoir on life, friendship and joys of fishing.

The Fast Show, Vic and Bob's Big Night Out, Shooting Stars, Harry Enfield and Chums... Paul Whitehouse and Bob Mortimer have been working in British comedy for over 30 years and are considered legends of the business.

Paul is an experienced angler. Bob last fished as a child. Paul will attempt to teach, Bob will attempt to listen. Both are old, both are ill, they are slightly cynical: so can they still find pleasure in something that gave them so much when they were young? Will they have a heart attack while trying to do so?