Items related to Redemption: From Iron Bars to Ironman

Redemption: From Iron Bars to Ironman 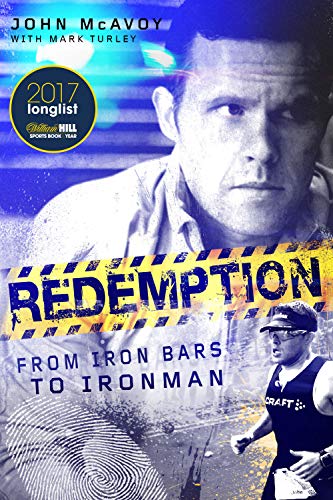 **Longlisted for the William Hill Sports Book of the Year Award**

Redemption: From Iron Bars to Ironman is the fascinating, frightening and inspirational autobiography of former career criminal, now world-record holder and endurance athlete John McAvoy. Born into a notorious London crime family, his uncle Micky was one of the key players in the legendary Brinks-Mat gold bullion caper. John bought his first gun at 16 and carved out a lucrative career in armed robbery. At one point he was one of Britain's most-wanted men. It took two spells in prison and the death of a friend on a botched heist to change his path. During his second stint in jail he discovered a miraculous natural talent while serving life in the Belmarsh high security unit - where fellow inmates included Abu Hamza, the hook-handed extremist cleric, and the 7/7 bombers. John broke three world rowing records while still an inmate and since his release has become one of the UK's leading Ironman competitors. He aims to turn pro in 2016 after competing in the European championships in Frankfurt. Redemption is the ultimate story of sporting salvation.

"One of the best introductions to a sporting title you're ever likely to read. Compelling. Engaging." --SportsBookoftheMonth.com

"As sporting stories go, the one McAvoy, now aged 33, tells in his newly published autobiography is extraordinary. He was born into organised crime." --The Telegraph

"From a life sentence and sharing a prison wing with Abu Hamza, to breaking nearly every UK indoor rowing record going, John McAvoy's is the quintessential story of redemption through sport." --Row-360.com

"The story of John McAvoy is not your normal triathlon tale. This is the (true) story of how sport, and triathlon, has helped transform a convicted armed robber to Ironman. A great read - a fascinating insight into another world. Couldn't put it down." --Tri247.com

John McAvoy has collaborated with Mark Turley to write his life story. Mark is the author of four books including Journeymen: The Other Side of the Boxing Business and Wiped Out: The Jerome Wilson Story. He has been published in The Telegraph, FHM, Boxing News and many other publications and websites. His work was longlisted for the William Hill prize 2015 and named among the Guardian's best sporting books for the same year.

1. Redemption: From Iron Bars To Ironman

2. Redemption: From Iron Bars to Ironman