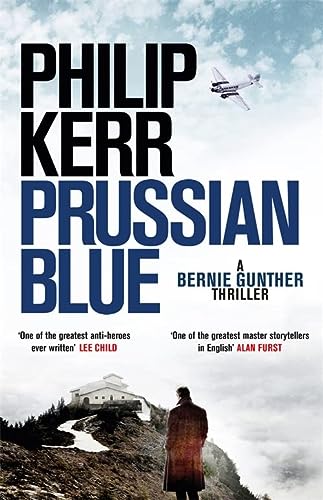 Bernie Gunther returns in the twelfth book in the Sunday Times and New York Times bestselling series, perfect for fans of John le Carre and Robert Harris. Lee Child calls Bernie Gunther 'one of the greatest anti-heroes ever written'.It's 1956 and Bernie Gunther is on the run. Ordered by Erich Mielke, deputy head of the East German Stasi, to murder Bernie's former lover by thallium poisoning, he finds his conscience is stronger than his desire not to be murdered in turn., Now he must stay one step ahead of Mielke's retribution.The man Mielke has sent to hunt him is an ex-Kripo colleague, and as Bernie pushes towards Germany he recalls their last case together. In 1939, Bernie was summoned by Reinhard Heydrich to the Berghof: Hitler's mountain home in Obersalzberg. A low-level German bureaucrat had been murdered, and the Reichstag deputy Martin Bormann, in charge of overseeing renovations to the Berghof, wants the case solved quickly., If the Fuhrer were ever to find out that his own house had been the scene of a recent murder - the consequences wouldn't bear thinking about.And so begins perhaps the strangest of Bernie Gunther's adventures, for although several countries and seventeen years separate the murder at the Berghof from his current predicament, Bernie will find there is some unfinished business awaiting him in Germany.

Bernie Gunther is as insubordinate, combative, interesting and entertaining as ever . . . yet another Kerr triumph (Sunday Times)

In Prussian Blue, Philip Kerr once more shows himself one of the greatest master story-tellers in English. The narrative is swift and adept, and so well-grounded in the history and custom of the period that the reader is totally immersed (Alan Furst)

Prussian Blue would be an exceptional achievement considered on its own, but it is incredible to think that this is the 12th novel in an on-going series which is yet to produce a dud. The research and accuracy of the historical setting match that of Alan Furst, but the hardboiled dialogue and Chandlerian turns of phrase raise Kerr's work even higher. Part adventure thriller, part historical procedural, Prussian Blue and Bernie Gunther never make a mis-step (Crimesquad)

As usual, Kerr is superb at imaginatively mixing his fictional detective with well-researched true-life characters and events (The Times)

A brilliantly twisting tale of espionage and betrayal (Sunday Times)

The twelfth book in the Sunday Times and New York Times bestselling series, perfect for fans of John le Carre. Lee Child calls Bernie Gunther 'one of the greatest anti-heroes ever written'.

Book Description Quercus Publishing, London, U.K., 2017. Soft cover. Condition: New. No Jacket. 1st Edition. Paperback; ***UNCORRECTED PROOF COPY***. London UK. Book Condition: New. Dust Jacket Condition: None. First edition, First Impression. 552 pp. Unread. Spine as new. Without dedication: IN EXCELLENT CONDITION, PLEASE CONTACT US BEFORE ORDERING THIS BOOK TO CONFIRM BOOK CONDITION AND EDITION (most of our books are 1st editions). We can send you photos of this book with a detailed description. No foxing. Shipping is normally same day from the UK. "UK BASED SELLER ALL OVERSEAS SHIPPING VIA AIRMAIL". If you do not want this service please make it clear to Abebooks you wish by Ship. In Stock.- THANKS! We do not stock ex-library or Book Club editions. We offer a money back guarantee if you are not fully satisfied, please contact us if you have any questions. Bookseller Inventory #O. 121217164351. Seller Inventory # 003400