Items related to As Easy as Pi: Stuff About Numbers That isn't (Just)...

Jamie Buchan As Easy as Pi: Stuff About Numbers That isn't (Just) Maths (I Used to Know That ...)

As Easy as Pi: Stuff About Numbers That isn't (Just) Maths (I Used to Know That ...) 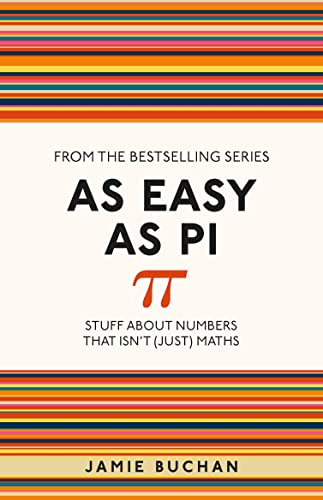 It's hard to imagine a world without numbers in this day and age, when our whole life is centered around commerce and money, and it is the only language that is the same the world over. However, did you know that for a long period of time people could not get their heads around the idea of zero, a figure representing nothing, and that it was even regarded as heretical in some circles? As Easy As Pi is an entertaining and accessible guide, written for those who love numbers - and those who don't - and uncovers a great deal of lore and intriguing information. Including: . Snippets of fascinating numerical facts . Myths and mysticism in the world of numbers . Numbers in language and used as slang . Pop-culture trivia . Useful mathematical rules to remember Taking a quirky and insightful look at the world of numbers, As Easy As Pi will delight and entertain any number enthusiast.

Numbers are all-pervasive in our world; Pythagoras even said they rule the universe. This guide to the numbers of everyday life explains how they influence our religion, myth, fiction and linguistic idioms, why some numbers are considered lucky or unlucky, how they are exploited in games and scams, and their vital role in the realms of mathematics and science.

A fab gift for anyone who loves facts and figures about numbers. It'll keep anoraks like me amused for hours. I loved it! (Now)

A hotchpotch of facts about numbers.. interesting in the Stephen Fry style (Irish Examiner)

An entertaining and accessible introduction to the world of numbers... offers a selection of offbeat information to delight any enthusiast of the subject (Waterstones Books Quarterly)

Buchan explores [numbers'] inescapable influence in everything... Astonishingly comprehensive for its size, this little book is wonderfully addictive (The Good Book Guide)

1. As Easy As Pi: Stuff About Numbers That Isn't (Just) Maths

2. As Easy As Pi: Stuff about numbers: Jamie Buchan

Book Description PAPERBACK. Condition: New. Book Cover and ISBN may be different from US edition but contents as same US Edition. Excellent Quality,Quick delivery, We may ship the books from Asian regions for inventory purpose. Our courier service is not available at PO BOX. Seller Inventory # nt_9781782434337