Items related to A Very Strange Way to Go to War: The Canberra in the...

Vine, Andrew A Very Strange Way to Go to War: The Canberra in the Falklands

A Very Strange Way to Go to War: The Canberra in the Falklands 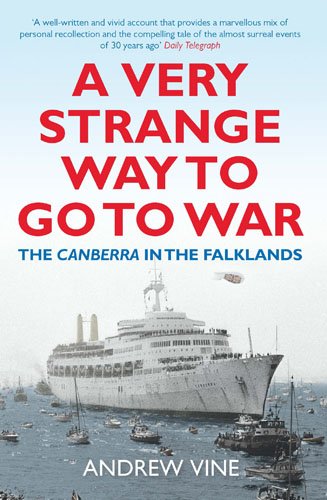 She was the last icon of an age of leisurely travel fading into memory even as she embarked on her maiden voyage: a luxurious ocean liner vast and brilliant white, a beacon of elegance and opulence. For a decade P&O s flagship SS Canberra was the standard passage for any Britons travelling to Australia, and subsequently the voyage of a lifetime for well-heeled cruise passengers. But then in March 1982 Britain stirred itself to go to war for the first time in generations in defence of a lonely and little-known outpost of empire, the Falkland Islands, and the Canberra, its round-the-world cruise suddenly interrupted at Gibraltar for the first of the military to board, found itself, surreally, requisitioned as a troopship to carry the Marines and the Paratroops into battle.

This is the astonishing story of how a luxury liner and her civilian crew as close as family went from pampering affluent retirees in the Mediterranean to taking thousands of soldiers, who pounded circuits of her creaking decks incessantly to keep fit, and took them down into the bitter winter waters of the South Atlantic. On the day troops landed to recapture the Falklands Canberra found herself in the thick of action with Argentine bombs raining down around her. Against the odds she survived, performing a crucial role as a hospital ship, then taking a vanquished and bewildered conscript army home to Buenos Aires before returning to Southampton, grubby and rust-streaked, forever to be fondly known as the Great White Whale, to a tumultuous hero s welcome.

This is the extraordinary story untold until now, of how unlikely combatants like waiters, cooks, nurses and cleaners who never in their dreams imagined they could be caught up in a war, found themselves on the front line at the very end of the world. Drawing on dozens of new interviews with those who were there, from the Canberra s crew to the soldiers and war correspondents who sailed with her, as well as previously unpublished archives, A Very Strange Way To Go To War is a candid, revealing and compelling story of bravery, by turns surprising, tender and deeply moving,. Above all, it is the story of a quintessentially British finest hour, brought about by ordinary men and women, who, when their country called, went all the way.

Andrew Vine is an award-winning journalist and assistant editor of the Yorkshire Post. He is author of 'Last of the Summer Wine: The Story of the World s Longest Running Comedy Series', and of 'A Very Strange Way to Go To War: The Canberra in the Falklands'. He lives in Leeds.