Items related to Moneyland: Why Thieves And Crooks Now Rule The World...

Bullough, Oliver Moneyland: Why Thieves And Crooks Now Rule The World And How To Take It Back

Moneyland: Why Thieves And Crooks Now Rule The World And How To Take It Back 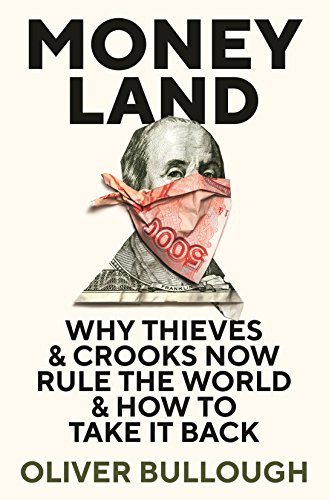 an ECONOMIST Politics and Current Affairs book of the year

and a DAILY MAIL and TIMES book of the year

Winner Creative Nonfiction prize at the Wales Book of the Year

From ruined towns on the edge of Siberia, to Bond-villain lairs in Knightsbridge and Manhattan, something has gone wrong with the workings of the world.

Once upon a time, if an official stole money, there wasn't much he could do with it. He could buy himself a new car or build himself a nice house or give it to his friends and family, but that was about it. If he kept stealing, the money would just pile up in his house until he had no rooms left to put it in, or it was eaten by mice.

And then some bankers in London had a bright idea.

Join the investigative journalist Oliver Bullough on a journey into Moneyland - the secret country of the lawless, stateless superrich.

Learn how the institutions of Europe and the United States have become money-laundering operations, undermining the foundations of Western stability. Discover the true cost of being open for business no matter how corrupt and dangerous the customer. Meet the kleptocrats. Meet their awful children. And find out how heroic activists around the world are fighting back.

This is the story of wealth and power in the 21st century. It isn't too late to change it.

If you want to know why international crooks and their eminently respectable financial advisors walk tall and only the little people pay taxes, this is the ideal book for you. Every politician and moneyman on the planet should read it, but they won't because it's actually about them. (John le Carré, author of A Legacy of Spies)

Corruption undermines democracy, weakens institutions and erodes trust, it destroys lives and impoverishes millions. Moneyland starts from that truth and tells London's part of that story. Bullough's book is an important challenge to our government, banks, law firms and professional services companies for their role in tolerating and sometimes facilitating a system that robs the poorest and today even threatens our own country's security. This important book shows clearly that foreign policy isn't about foreigners, it's about us. (Tom Tugendhat, Chair of the Foreign Affairs Select Committee)

A concise, confident book ... pacy, clever and entertaining ... if you still have any illusions about the wonders of liberated capitalism, Moneyland will probably cure you. (Andy Beckett Guardian 2018-09-08)

Eye-opening and essential ... Bullough has provided a model for how to tell a gripping and comprehensible story about a complex and crucial subject. You cannot understand power, wealth and poverty without knowing about Moneyland. (Simon Kuper New Statesman 2018-08-31)

There are few people who know the world of illicit finance and money laundering like Oliver Bullough. He takes us on a journey through the maze of complicity and criminality that will upend all your confidence in the institutions that should be protecting us. (Bill Browder, author of Red Notice: How I became Putin's No. 1 Enemy)

A great guide to a country you can't afford to visit but which is all around you (Richard Brooks, author of Bean Counters 2018-09-04)

This is meticulously researched and engagingly told, and reveals the horror and scale of dirty money flowing around the world. The central role played by the UK and jurisdictions associated with the British family mean that every person concerned about corruption and fairness in the UK should read this book - and then campaign and act. (Margaret Hodge, MP)

Unputdownable. Funny, tragic and explains the world. I hope it helps change it, too. (Peter Pomerantsev, author of Nothing Is True and Everything is Possible)

Jaw-dropping and deeply unsettling. Oliver Bullough provides a sobering and brilliant account of how piracy on an epic-scale is alive and well in the 21st century. A must-read. Simple as that. (Peter Frankopan, author of The Silk Roads)

A biting indictment of an unfair and damaging system (FT)

This is the story of wealth and power in the 21st century. It isn't too late to change it.

1. Moneyland: Why Thieves And Crooks Now Rule The World And How To Take It Back