Items related to Confronting the Classics: Traditions, Adventures and... 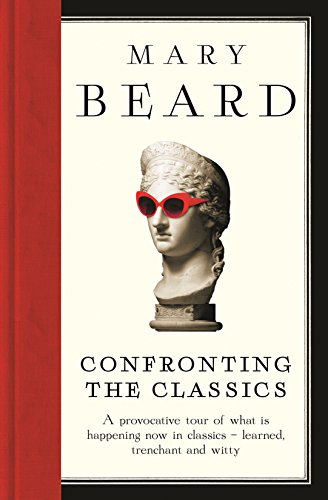 Mary Beard is one of the world's best-known classicists - a brilliant academic, with a rare gift for communicating with a wide audience both though her TV presenting and her books.In a series of sparkling essays, she explores our rich classical heritage - from Greek drama to Roman jokes, introducing some larger-than-life characters of classical history, such as Alexander the Great, Nero and Boudicca. She invites you into the places where Greeks and Romans lived and died, from the palace at Knossos to Cleopatra's Alexandria - and reveals the often hidden world of slaves. She takes a fresh look at both scholarly controversies and popular interpretations of the ancient world, from The Golden Bough to Asterix.
The fruit of over thirty years in the world of classical scholarship, Confronting the Classics captures the world of antiquity and its modern significance with wit, verve and scholarly expertise.

Comprising updated versions of 31 essays published over the past two decades, this volume takes the reader on 'a provocative tour of what is happening now in Classics'. Professor Beard reassesses old answers in scholarly debates concerning Greco-Roman antiquity; offers fresh interpretations of heroes and antiheroes, from the Greek poet Sappho to the emperor Hadrian; explores the evidence for ordinary Romans' worries and ambitions; and asks what our modern responses to the ancient world say about us.

She's pulled off that rare trick of becoming a don with a high media profile who hasn't sold out, who is absolutely respected by the academy for her scholarship ... what she says is always powerful and interesting (Guardian)

Beard is a very funny and penetrating commentator ... and has a fantastic knack for controversy. If they'd had Mary Beard on their side back then, the Romans would still have their empire (Daily Mail)

Beard is the best...communicator of Classics we have (Independent on Sunday)

witty, erudite collection...To Beard, the classical past is alive and kicking - and she has the great gift of being able to show just why classics is still a subject worth arguing about (Sunday Times)

With such a champion as Beard to debunk and popularise, the future of the study of classics is assured (Daily Telegraph)

so engaging, and at times so very funny (Edith Hall Times)