Items related to Treasures of AC/DC 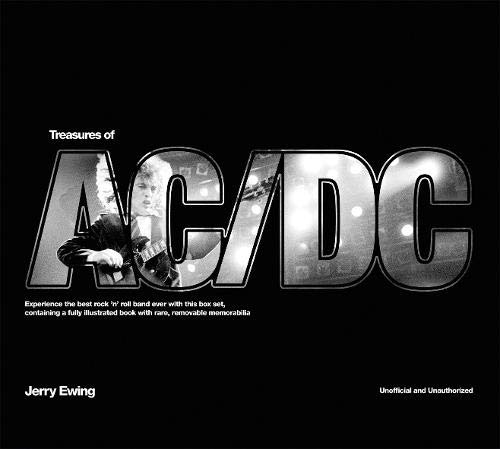 AC/DC are the undisputed kings of hard rock. They have streets named after them in Australia and Spain, they were inducted into the Rock and Roll Hall of Fame in 2003, and "Back in Black" is the best-selling album of all time by a band. This book tells their story that spans five decades of the best rock 'n' roll.

Jerry Ewing grew up in Sydney, Australia in the 1970s where the AC/DC bug bit him at an early age. Unhappily hauled half way round the world to the grey drizzle of England, he sought solace in the burgeoning sounds of the New Wave Of British Heavy Metal and the fact that AC/DC were now a big enough phenomenon that they too played concerts there. Somehow a degree in Management Science led to him working on Metal Forces magazine, from which point he's never looked back. He has since worked on Metal Hammer, launched both Classic Rock and Classic Rock Presents Prog magazines, and has also worked for Maxim, Vox, Stuff and Bizarre magazines as well as presenting many different radio shows over the years and writing an increasing amount of books on music and football.

Book Description Carlton Publishing Group, 2012. Hardcover. Condition: Good. Connecting readers with great books since 1972. Used books may not include companion materials, some shelf wear, may contain highlighting/notes, may not include cdrom or access codes. Customer service is our top priority!. Seller Inventory # S_278687908

Book Description Carlton Publishing Group, 2012. Condition: Good. A+ Customer service! Satisfaction Guaranteed! Book is in Used-Good condition. Pages and cover are clean and intact. Used items may not include supplementary materials such as CDs or access codes. May show signs of minor shelf wear and contain limited notes and highlighting. Seller Inventory # 1780971214-2-4