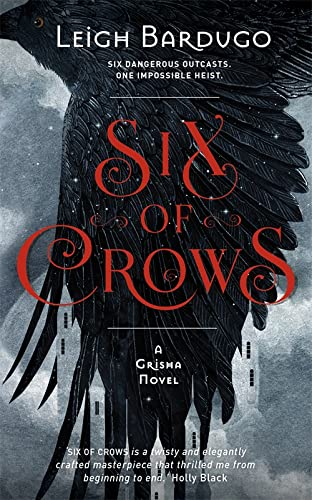 Game of Thrones meets Ocean's Eleven in this brand new fantasy epic from the #1 New York Timesbestselling author of Shadow and Bone, Siege and Storm and Ruin and Rising, Leigh Bardugo. As gripping, sweeping and memorable as the Grisha trilogy, Six of Crows will be perfect for fans of George R. R. Martin, Laini Taylor and Kristin Cashore, and will take Leigh's fans back into the world they know and love.

Criminal prodigy Kaz Brekker is offered a chance at a deadly heist that could make him rich beyond his wildest dreams - but he can't pull it off alone.

A convict with a thirst for revenge.
A sharpshooter who can't walk away from a wager.
A runaway with a privileged past.
A spy known as the Wraith.
A Heartrender using her magic to survive the slums.
A thief with a gift for unlikely escapes.

Kaz's crew is the only thing that might stand between the world and destruction - if they don't kill each other first.

SIX OF CROWS is a twisty and elegantly crafted masterpiece that thrilled me from beginning to end (Holly Black, author of THE DARKEST PART OF THE FOREST)

It's like THE HUNGER GAMES meets POTTER meets TWILIGHT meets LORD OF THE RINGS meets GAME OF THRONES; basically epic magical fantasy but completely for grown-ups (STYLIST on The Grisha Trilogy)

Cracking page-turner with a multi-ethnic band of misfits with differing sexual orientations who satisfyingly, believably jell into a family (KIRKUS REVIEWS)

Six of Crows is impossible to put down. Bardugo is a master at an ensemble cast, and it is a joy to see her wonderfully crafted characters come to life ... The fantastic plot is fast moving and full of twists and turns, but it is the fate of the characters that really draws the reader in. Bardugo has an incredible imagination and Six of Crows showcases her writing at its very best. (BOOKTRUST)

This is basically Ocean's Eleven set in a Game of Thrones-esque world ... The result is a pacey read with electric prose and well-drawn characters (THE INDEPENDENT)

Unlike anything I've ever read (Veronica Roth, author of the Divergent trilogy on The Grisha Trilogy)

Bardugo has obviously spent a lot of time here, and is sure footed as she leads us through the twists and turns of this engaging adventure. There is enough action, danger and romance to satisfy even the most jaded of readers (School Librarian)

a fitting and brilliantly crafted conclusion to the Grisha trilogy, one that fans will be sighing over happily for years to come (Spec on Spec Fic)

Game of Thrones meets Ocean's Eleven in this brand new fantasy epic from the #1 New York Timesbestselling author of Shadow and Bone, Siege and Storm and Ruin and Rising, Leigh Bardugo. As gripping, sweeping and memorable as the Grisha trilogy, Six of Crows will take Leigh's fans back into the world they know and love, and this book is perfect for fans of George R. R. Martin, Laini Taylor and Kristin Cashore.

Book Description Paperback. Condition: Good. Ex Library Book with usual stamps and stickers. Slight tan to the page edges. Good condition is defined as: a copy that has been read but remains in clean condition. All of the pages are intact and the cover is intact and the spine may show signs of wear. The book may have minor markings which are not specifically mentioned. Most items will be dispatched the same or the next working day. Seller Inventory # mon0016926855

Book Description Paperback. Condition: Very Good. The book has been read, but is in excellent condition. Pages are intact and not marred by notes or highlighting. The spine remains undamaged. Seller Inventory # GOR006984020

Book Description Paperback. Condition: Fair. A readable copy of the book which may include some defects such as highlighting and notes. Cover and pages may be creased and show discolouration. Seller Inventory # GOR009606687