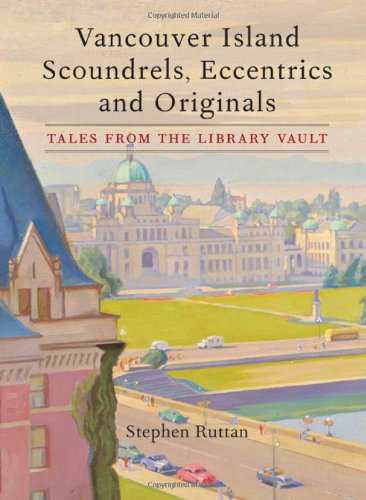 Found on the history shelves of the Greater Victoria Public Library, these twenty true stories are brought to life by Stephen Ruttan. They draw a picture of the life of a city with a recent past that's both unconventional and colourful. From Miss Wilson and her famous parrot, Louis, to Jimmy Chicken Island, named after a man who acquired his surname from his habit of stealing chickens, to the Pig War, when Britain and the United States nearly came to blows over the San Juan Islands, to the rise and fall of Francis Rattenbury, one of Victoria's best-known architects, these stories reveal a lively history of a West Coast capital city. Archival illustrations, newspaper clippings, and modern photos help make Vancouver Island Scoundrels, Eccentrics and Originals a delightful and illluminating read.

Stephen Ruttan is a local history librarian at the Greater Victoria Public Library. Born in Victoria in 1947, he grew up in a smaller, more rural Victoria of pheasants and Garry oak meadows. He obtained degrees in history and library science at the University of British Columbia and returned to Victoria in 1975. He then joined the Public Library staff. He began to write the tales and publicize the library's local history resources. Four years ago the CBC's On the Island radio show began interviewing Stephen on the tales, and last year the Times Colonist serialized them in the "Monitor." When not writing about this region he likes to photograph it and hike its trails.