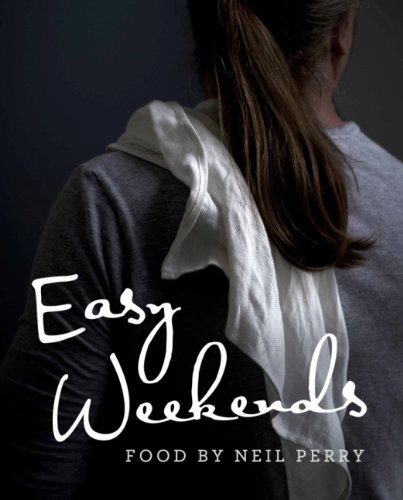 As Australia's best known chef, Neil Perry is often associated with the high end food served at his successful restaurants Rockpool, Rockpool Bar & Grill and Spice Temple. Now in Easy Weekends, Neil celebrates cooking at home with over 90 recipes that focus on flavoursome food for any weekend occasion. Whether you're looking for an easy and delicious family stir-fry on a Friday night, clever ideas for Saturday dinner party menus, or preparing a slow-cooked Sunday feast for friends, Neil Perry's Easy Weekends has an inspiring and accessible recipe for you. Key points: this book features compilation feasting menus designed for celebrations; selected recipes are tailored to larger occasions with recipes that serve 10 people or more

Neil Perry is one of Australia's leading and most influential chefs. He has managed several award-winning restaurants in Australia, and today concentrates on his flagship brand, the Rockpool Group, which includes Rockpool Sydney; Rockpool Bar & Grill Sydney, Melbourne and Perth; Spice Temple Sydney and Melbourne; and The Waiting Room. Neil has been creating menus for Qantas since 1997, redefining in-flight dining and service, and is the author of six cookbooks. Neil is a television presenter on the LifeStyle Channel, and more recently as an Iron Chef on Iron Chef Australia.

Book Description Murdoch Books, 2013. Condition: Good. Ships from the UK. Former Library book. Shows some signs of wear, and may have some markings on the inside. Seller Inventory # GRP81586578

Book Description Murdoch Books, 2013. Hardcover. Condition: Good. Ex Library Book with usual stamps and stickers. Minor Shelfwear. Good condition is defined as: a copy that has been read but remains in clean condition. All of the pages are intact and the cover is intact and the spine may show signs of wear. The book may have minor markings which are not specifically mentioned. Most items will be dispatched the same or the next working day. Seller Inventory # mon0011664021

Book Description Murdoch Books, 2013. Hardcover. Condition: Acceptable. Ex Library Book with usual stamps and stickers. Pulling to binding. (Hence Acceptable) Good reading copy. Acceptable: a readable copy. All pages and the cover are intact (dust cover may be missing). Pages can include considerable notes--in pen or highlighter--but notes cannot obscure the text. Most items will be dispatched the same or the next working day. Seller Inventory # mon0011750211