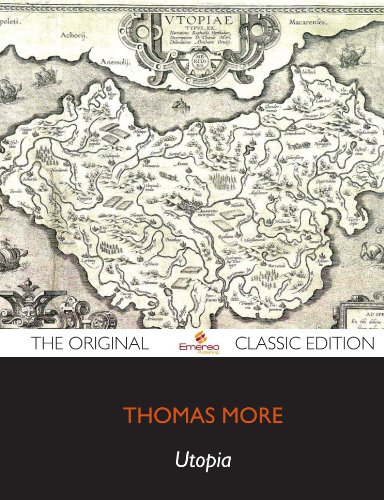 Utopia, written in 1516 by Thomas More, is probably one of the most important books ever written. Why? . Simply because it influenced many people, and motivated many events: it made a difference.

Utopia means, literally, no place. The word didn't exist until More coined it in this book. He wanted to make a critic regarding the English society of his time, but needed to cloak it under a fictional mantle due to censure. Displeasing the king was very dangerous in More's time.

What is this short novel about? . Well, More introduces us to an imaginary character, Raphael Hythloday, a traveler that has visited a distant country: Utopia. After meeting More, Raphael tells him about the country he visited, and afterwards More writes a book about what he was told.

To begin with, in that country community is more important that private aims, and that fact permeates all social and political life. There is no private propriety of the means of production, and everything belongs to everybody. Work is obligatory to all healthy men and women, and those who want to do nothing are punished with forced labor. There is no money, but everybody has what is needed to live well, although frugally. Thanks to the fact labor is well distributed, leisure time is available to all. As a result, men and women (equals in this society) can dedicate time to cultivate their minds.

Other important points that should be highlighted regarding Utopia, especially because they contrast strongly with the situation of More's England, are that in this country all religions are allowed, and that there isn't an autocratic rule (a democratically elected assembly and different local governments are elected). All in all, equality prevails, and thanks to the above mentioned arrangements harmony is achieved.

Utopia was written a few years later that Machiavelli's The Prince, but the differences between the two books are incredible.