Items related to Double Entry: How the merchants of Venice created modern...

Double Entry: How the merchants of Venice created modern finance 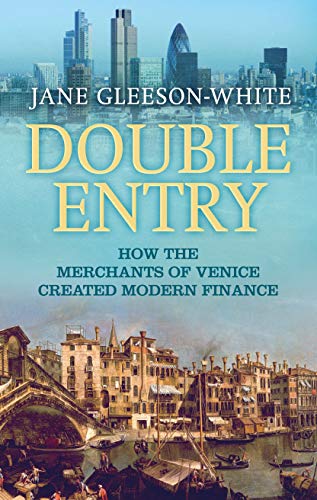 Drawing together a 15th century Venetian monk, Leonardo da Vinci, Josiah Wedgwood and the rise of corporate capitalism, Jane Gleeson-White argues that double-entry bookkeeping is one of history's best -- kept secrets and most important untold tales.

Our world is governed by the numbers generated by the accounts of nations and corporations. We depend on these numbers to direct our governments, organisations, economies, societies. But where did they come from -- and how did they become so powerful?

The answer to these questions begins in the Dark Ages, with the emergence in northern Italy of a new form of accounting called double-entry bookkeeping. The story of double entry reaches from the Crusades through the Renaissance to the factories of industrial Britain and the policymakers of the Great Depression and the Second World War. At its heart stands a Renaissance monk, mathematician and magician, and his celebrated treatise for merchants. With double entry came the wealth and cultural efflorescence that was the Renaissance, a new scientific worldview, and a new economic system: capitalism.

Over the past century accounting has flourished to an astonishing degree, despite the many scandals it has left in its wake. The figures double entry generates have become a sophisticated system of numbers which in the twenty-first century rule the global economy, manipulated by governments, financial institutions and the quant nerds of Wall Street. They do, however, fall short when it comes to measuring our most precious resources -- health, happiness and the environment -- and Jane Gleeson-White makes a strong case for reconfiguring double-entry bookkeeping to better reflect the needs of our planet.

Entertaining and informative Source: The Economist

A thoughtful and multifaceted work of history, touching on subjects as diverse as Christianity, mathematics, company law and fine arts. Source: The Australian

Jane Gleeson-White has worked as a writer and editor in Sydney and London since 1990. She has a Bachelor of Economics and an honours degree in English literature from the University of Sydney. She is the author of Classics (2005) and Australian Classics (2007).

1. DOUBLE ENTRY How the Merchants of Venice Created Modern Finance

Book Description Allen and Unwin, 2012. Hardcover. Condition: Used; Good. **SHIPPED FROM UK** We believe you will be completely satisfied with our quick and reliable service. All orders are dispatched as swiftly as possible! Buy with confidence!. Seller Inventory # 3402792