Items related to A Kitchen in France: A Year of Cooking in My Farmhouse

Mimi Thorisson A Kitchen in France: A Year of Cooking in My Farmhouse

A Kitchen in France: A Year of Cooking in My Farmhouse 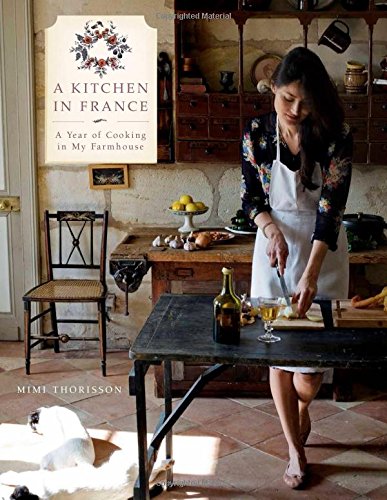 Be transported to Mimi Thorisson's rustic farmhouse kitchen in the South- West of France in this sumptuously photographed collection of simple, elegant French recipes. When Mimi and her husband moved with their young children from Paris to a small town in out-of-the-way Médoc, she discovered a whole new way of sourcing, preparing and eating food. She learnt the joys of growing your own produce and learning to cook with seasonal ingredients; she sourced wonderful, high-quality produce from local farmers; and she discovered a repertoire of delicious new recipes to cook for her family and friends.

Divided into chapters according to the seasons, A Kitchen in France shares Mimi's mouth-watering recipes, which are rooted in the French classics but given a modern, fresh twist, using simple, flavoursome ingredients. Perfect for pleasing a crowd, the recipes include roast chicken with herbs and crème fraîche; cèpe and parsley tartlets; winter vegetable cocotte; apple tart with orange flower water; and salted butter crème caramel, and will surely bring a touch of the French countryside into any home.

"Mimi Thorisson's gorgeous new book, A Kitchen in France, is a charming window into an idyllic life in Medoc. While we can't all live in a gorgeous farmhouse surrounded by lush woods, handsome children, and inquisitive terriers, at least we can now re-create at home our own slice of heaven with Mimi's delectable cherry clafoutis." -April Bloomfield, author of A Girl and Her Pig "Mimi's book is an enchanting look at French-style country cooking, and it will make you run to the stove to re-create the delicious traditions it celebrates." -Clotilde Dusoulier, author of The French Market Cookbook"Her first book is filled with seasonal recipes and envy-inducing imagery" -Home Beautiful "a wonderful escape, brimming with exquisite photography of Mimi and her family, the local farms and markets, and Mimi's irresistible recipes for each season." -Herald Sun

Ever since she was a little girl, Mimi Thorisson has been deeply passionate about food. Her childhood was largely spent scurrying between the restaurants of Hong Kong, where she grew up, and the bistros of Paris and the South of France, where she spent holidays at her French grandmother's.

After a life full of adventure and travel, and a career in fashion, media and television, Mimi settled down in Paris with Oddur, her photographer husband. Four years ago, Mimi, Oddur, their four young children, two older step-children and their 14 dogs took the leap and moved out of Paris to the countryside in Médoc. Here Mimi was able to devote time to her culinary passions and embrace farmhouse life. Her recipes and stories have spilled out onto the pages of Manger, Mimi's aspirational blog that was named Saveur's Best Regional Food Blog 2013. Mimi also hosts two cooking shows on French television.

Buy Used
Condition: Fine
Book is in fine condition with... Learn more about this copy

1. A Kitchen in France: A year of cooking in my farmhouse

2. A Kitchen in France: A year of cooking in my farmhouse

Book Description Hardie Grant Books, 2014. Condition: Good. A+ Customer service! Satisfaction Guaranteed! Book is in Used-Good condition. Pages and cover are clean and intact. Used items may not include supplementary materials such as CDs or access codes. May show signs of minor shelf wear and contain limited notes and highlighting. Seller Inventory # 1742709346-2-4