Items related to The Waterless Sea: Book 2 of the Chanters of Tremaris

Constable, Kate The Waterless Sea: Book 2 of the Chanters of Tremaris

The Waterless Sea: Book 2 of the Chanters of Tremaris 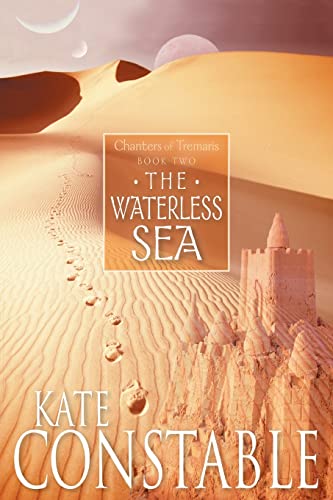 Tremaris is a land divided. From the islands of Firthana, across the deserts of Merithuros to the sinister Black Palace of Hathara, the healing can only begin when the dark magic is unravelled. Calwyn and her friends travel to the Merithuran Empire in search of kidnapped children. They must survive the vast and unforgiving desert and the treacherous Palace of Cobwebs, where they uncover the shameful secret that binds the Empire. Meanwhile, Darrow has formed a dubious alliance with rebels and is marching on the Black Palace. Can he be trusted now that he has the power of the great Ring of Lyonssar? In a stunning climax, Calwyn's actions have greater consequences than she could ever have imagined.

'Volume three can't come quickly enough!' Sue Bursztynski, www.januarymagazine.com'engaging characters and an engrossing story', ACYL newsletter No. 3 Sept 2003.'Book 2 in the Chanters of Tremaris is as captivating as the first (book) with a breathtaking climax Constable's writing is strong and imaginative and promises much for the third book in the series.' Reading Time Vol 47 No 4 Nov 2003.

Kate Constable was born in Victoria but spent much of her childhood in Papua New Guinea, without television but within reach of a library where she 'inhaled' stories. She studied Arts/Law at Melbourne University before working part-time for a record company while she began her life as a writer. She has had stories published in Meanjin, Island and other literary magazines. The Chanters of Tremaris series has been published in the USA, Japan, Denmark and Slovenia. Kate lives in West Preston, Victoria, with her husband and two daughters.

1. The Waterless Sea (Chanters of Tremaris)

2. The Waterless Sea (Chanters of Tremaris)