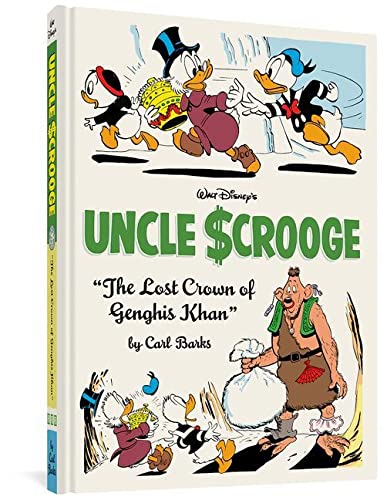 Worried about an earthquake that might swallow his money bin, Uncle Scrooge digs deep to secure his fortune -- and discovers an underground civilization! Introducing the Terries and Fermies -- the subterranean critters who can make earthquakes! Of special note, our presentation of this story restores two pages that were cut from its original publication. Then, Scrooge shanghais Donald, Huey, Dewey, and Louie to the Himalayas to help him recover "The Lost Crown of Genghis Kahn." And when Scrooge is hypnotized to go back in time and learn the location of a pirate's buried treasure, he thinks he's got a clear shot -- until he learns that Donald is also on the trail. And the race is on!

Carl Barks (1901-2000) spent most of his life in Oregon. In 1987, he was one of the three inaugural inductees in the Will Eisner Comic Book Hall of Fame (along with Eisner and Jack Kirby). He's also a Disney Legend.