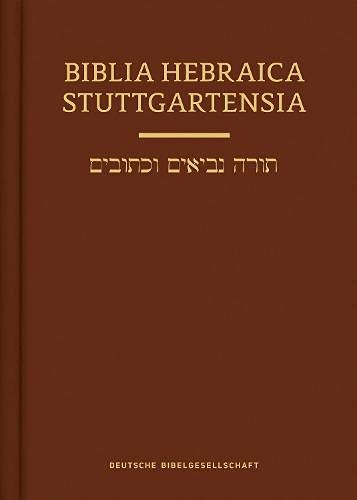 Book Description Hendrickson Publishers Inc, United States, 2021. Hardback. Condition: New. Compact. Language: English. Brand new Book. BIBLIA HEBRAICA STUTTGARTENSIA, 2020 Hardcover EditionBiblia Hebraica Stuttgartensia (BHS) is known to be the definitive edition of the Hebrew Bible. It is widely regarded as a reliable edition of the Hebrew and Aramaic scriptures and is the most widely used original-language edition among scholars.It is a revision of the third edition of the Biblia Hebraica edited by Rudolf Kittel, the first Bible to be based on the Leningrad Codex. The Leningrad Codex is the oldest complete Hebrew Bible still preserved. It originally appeared in installments, from 1968 to 1976, with the first one-volume edition in 1977; it has since been reprinted many times. The text is a nearly exact copy of the Masoretic Text as recorded in the Leningrad Codex. The Masoretic notes are completely revised.Included is a foreword in German, English, French, Spanish and Latin as well as an English and German key to the Latin words, abbreviations and other symbols in the critical apparatus.Biblia Hebraica Stuttgartensia (BHS), 2020 Compact Hardcover Edition is identical in content to the standard edition (including the critical apparatus in Latin and the foreword in multiple languages); however, its size makes it exceptionally convenient for the student of Hebrew to carry and use. Its portable size in no way compromises the readability of both text and critical apparatus, which retains a bold, clear font. Biblia Hebraica Stuttgartensia (BHS), 2020 Compact Hardcover Edition will be replacing the two compact editions that preceded it: the 2006 Compact Hardcover Edition and the 1997 Compact Paperback Edition. This new edition is priced between these two prior editions and will be appreciated for its greater affordability and sturdy construction. Seller Inventory # AAS9781683073529