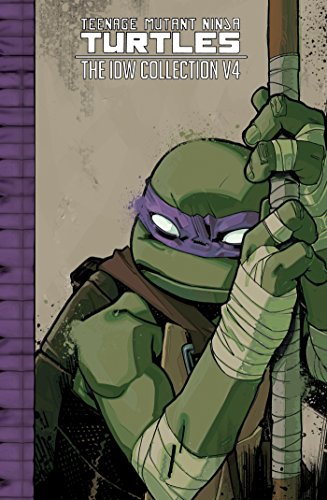 Recovering from the events of "City Fall," the Turtles seek sanctuary in the countryside, but questions remain unanswered and tension festers among the brothers. Meanwhile, in New York, Shredder tightens his grip on the city in their absence and Krang's plan to destroy the Earth is ramping up but Baxter Stockman has ideas of his own. Collects TMNT issues #29-37, Utrom Empire, and the 2014 Annual.

Tom Waltz is a former active duty U.S. Marine, Desert Storm vet, and former California National Guard Military Policeman. He is an editor for premiere comic book publisher IDW Publishing (www.IDWpublishing.com), as well as the writer of critically-acclaimed graphic novels, including TEENAGE MUTANT NINJA TURTLES, THE LAST FALL, CHILDREN OF THE GRAVE, FINDING PEACE (with Nathan St John), AFTER THE FIRE, SILENT HILL: SINNER'S REWARD, SILENT HILL: PAST LIFE, SILENT HILL DOWNPOUR: ANNE'S STORY and others. He has also written for video games, including as co-writer for SILENT HILL: DOWNPOUR (Konami), and writer for GHOSTBUSTERS: SANCTUM OF SLIME (Atari), TEENAGE MUTANT NINJA TURTLES: BROTHERS UNITE (Paramount), and TEENAGE MUTANT NINJA TURTLES: MUTANTS IN MANHATTAN (Activision). He grew up in Clinton, Michigan and currently makes his home in San Diego, California with his wife and two children. Kevin Eastman - Born in 1962 in Portland, Maine, Kevin began drawing as soon as he was able to hold a crayon. His discovery of comic books gave meaning to his crazed doodling. When Kevin discovered and studied the work of Jack Kirby, Russ Heath, Richard Corben, Vaughn Bode and John Severin, he began to hone his craft. His first published work appeared in 1980, a year or so before he met Peter Laird. In May 1984, he and Laird published Teenage Mutant Ninja Turtles #1, creating the hit heroes in a half-shell. Eastman co-writes Teenage Mutant Ninja Turtles for IDW and can sometimes be found at the San Diego Comic Art Gallery.