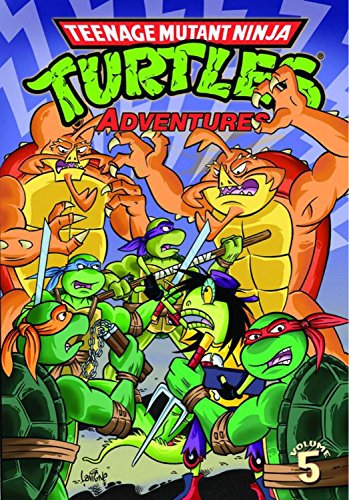 The all-ages TMNT action continues in this collection of TMNT Adventures! Enjoy classic Turtles tales like "Fight The Power", "Mondo Metal", "The Man Who Sold The World", and "Sun And Steel". Collects issues numbered 17-20.

Stephen Murphy is an American comic book writer and editor known for his work on the Teenage Mutant Ninja Turtles series. With Michael Zulli, he was co-creator of the critically acclaimed 1980s independent comic The Puma Blues. Alongside fellow Mirage staffer Ryan Brown, the two men revamped the Teenage Mutant Ninja Turtles Adventures title for Archie Comics, beginning in 1989 with issue #5. In their hands the comic immediately diverged from the cartoon series into unique new story arcs, often incorporating social, environmentalist, and animal rights themes. It also introduced several new characters of various races and backgrounds, including humans, mutants, aliens, and other anthropomorphic creatures. The stories were often seen as "deeper" and more "serious" than the cartoon. During that period, Murphy co-created the characters Jagwar, Nova Posse, Snake-Eyes, and Sarnath; he united several of the series' recurring characters as a separate team, the Mighty Mutanimals. Murphy wrote the majority of his work on TMNT Adventures under the name "Dean Clarrain."

Book Description Paperback. Condition: New. Paperback. The all-ages TMNT action continues in this collection of TMNTAdventures! Enjoy classic Turtles tales like Fight The Power, MondoMetal, The Man Who Sold The World, and Sun And Steel. Collec.Shipping may be from multiple locations in the US or from the UK, depending on stock availability. 124 pages. 0.391. Seller Inventory # 9781613776902