Items related to Across The Savage Sea

Maud Fontenoy Across The Savage Sea

Across The Savage Sea 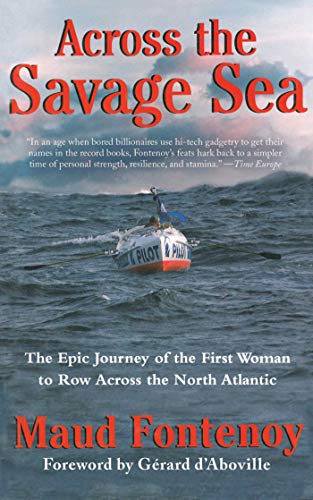 In June 2003, Maud Fontenoy, a young woman and seasoned mariner, set out from Newfoundland in her 24-foot-long boat, Pilot, to row across the North Atlantic. Her goal: to prove that a woman could do the impossible. She knew how hazardous the trip would be, but the reality was far more harrowing than even she had imagined: violent storms and crashing 15-foot waves that capsized her sturdy but vulnerable craft not once but dozens of times; bouts of intense cold, hunger and sheer exhaustion from long days of rowing; near-freezing waters; circling sharks; huge freighters that suddenly emerged out of the thick fog, almost hitting her boat. Then there was her map, updated daily, that constantly reminded her how far she was from her goal. But her journey also had its share of wonders: breathtaking sunsets, the serenity of a star-studded night, her close encounters with dolphins and whales, and the overwhelming feeling of relief and accomplishment when at long last she reached the coast of Spain on October 7, 117 days after her departure.

Fontenoy s feats hark back to a simpler time of personal strength, resilience and stamina lots of it. --The time

Over 1,000 men have climbed Mount Everest, 12 have walked on the moon, and only six have rowed the Atlantic from west to east. No woman had yet accomplished this feat - until Maud Fontenoy, a 2005 Time (Europe) Hero.

1. Across the Savage Sea

2. Across the Savage Sea: The Epic Journey of the First Woman to Row Across the North Atlantic

3. Across the Savage Sea: The Epic Journey of the First Woman to Row Across the North Atlantic

4. ACROSS THE SAVAGE SEA: THE EPIC

5. ACROSS THE SAVAGE SEA: THE EPIC