Items related to Storm of Steel 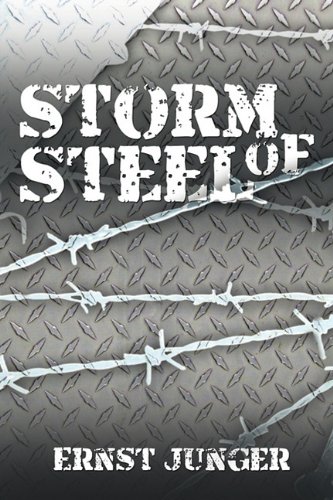 Jünger's great book matter-of-factly conveys the mysterious glamour of war, the exhilaration of its excess and intensity and, not least, the undeniable glory of men bravely preparing for battle as for "some terrible silent ceremonial that portends human sacrifice."

"This is unquestionably one of the most striking accounts of the First World War..." -- Evening Standard, August 18, 2003 (by Richard Holmes)

"What raises Jünger to the level of epic is the grandeur of the prose, which is sublime but never sentimental." -- Telegraph, August 23, 2003 (by Daniel Johnson)

Ernst Jünger, the son of a wealthy chemist, ran away from home to join the Foreign Legion. His father dragged him back, but he returned to military service when he joined the German army on the outbreak of the First World War.Storm of Steel was Jünger's first book, published in 1920. Jünger died in 1998.