Items related to War and Peace 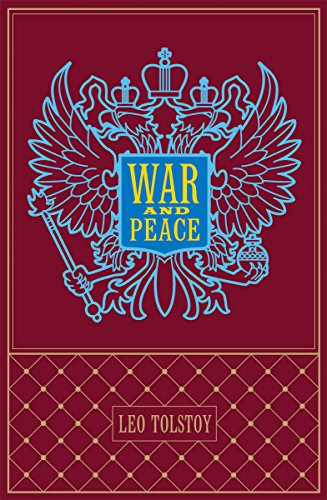 It was acclaimed author Leo Tolstoy's finest literary achievement. War and Peace, the story of five wealthy families of the Russian aristocracy during and after Napoleon's invasion of Russia, is also considered to be one of the finest novels of all time—a book no home library should be without.

Now available in this new, enhanced Canterbury Classics edition, War and Peace includes a genuine leather cover, specially designed covers, and a ribbon bookmark for a complete, elegant package. An introduction by a leading literary critic also sheds light on this complicated yet ultimately rewarding and fascinating work.

Perfect for Tolstoy devotees as well as those new to this legendary work, this edition of War and Peace is sure to be a classic.

Leo Tolstoy, or Count Lyev Nikolayevich Tolstoy (September 9, 1828 – November 20, 1910), was a Russian author, essayist, and philosopher whose contributions include two of the greatest literary masterpieces of all time, War and Peace, and Anna Karenina.

Ernest Hilbert received his doctorate in English Language and Literature from Oxford University in 2000. He has served as editor for the Oxford Quarterly, Random House’s magazine Bold Type, and the Contemporary Poetry Review. His writing has appeared in American Scholar, The New Republic, The New Criterion, London Magazine, Yale Review, and many other publications. He is an antiquarian bookseller with the firm Bauman Rare Books, where he has had the pleasure of placing many Charles Dickens first editions of into private and public collections.

Among the great novels of the world, 'War and Peace' has long held pride of place because it fulfills, in its seamless interweaving of the historical and the personal, and its genius in registering the entire scale of human life, all the promise latent in the art of fiction itself.