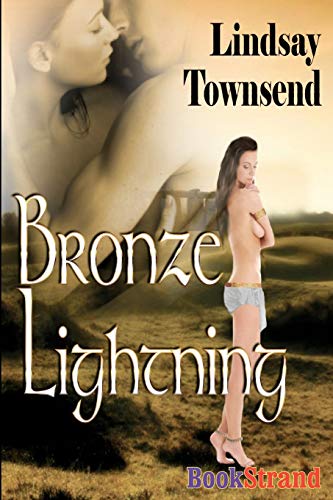 Ancient Krete, 1562 BC. Sarmatia is a trainer for the Bull Rite, the dangerous, glamorous ceremony of bull-leaping that gave a young Kretan entry into adulthood. Fearn is healer from the distant northern Isle of Stones summoned for his skills to the sick-bed of Minos, the Kretan king. They meet on the dusty flagstones of the palace courtyard and both save a life. A year passes. They are betrothed, but Fearn has returned home and is chosen king of his small northern country. As king, master of storms, he cannot return to Krete. Fearn writes to Sarmatia releasing her from her vows - but is this what they really want? Sarmatia leaves Krete to search for Fearn. Many months and life-and-death adventures later, she is reunited with him. She and Fearn are still deeply in love but there is an unknown enemy working against them, one who will stop at nothing, even murder. ** "In Bronze Lightning I wanted to show ancient Krete, ancient Egypt, Stonehenge and Avebury as they might have been when people lived and worshipped there, the magic and beliefs of Bronze Age Europe, and two young lovers, Sarmatia and Fearn, who are driven apart by fate but who both fight to be reunited." ~ Lindsay ~ ** A BookStrand Mainstream Romance