Items related to Popular Romances of the West of England: The drolls,...

Hunt, Robert Popular Romances of the West of England: The drolls, traditions, and superstitions of old Cornwall (Forgotten Books) 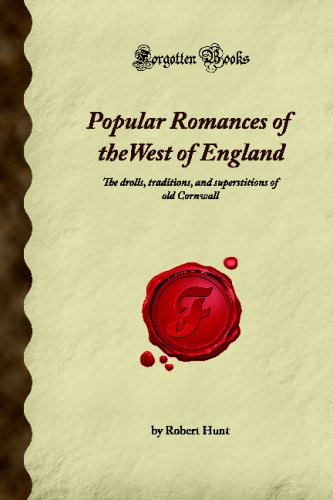 Popular Romances of the West of England by Robert Hunt [1903].

Publisher's Preface; Preface To The Third Edition; Introduction; The Giants; The Age Of The Giants; Corineus And Gogmagog; The Giants Of The Mount; The Key Of The Giant's Castle; The Rival Giants; The Giants Of Trencrom, Or Trecrobben; The Giants At Play; Holiburn Of The Cairn ; The Giant Of Nancledry ; Trebiggan The Giant ; The Lord Of Pengerswick And The Giant Of St Michael's Mount; The Giant Of St Michael's Mount Loses His Wife; Tom And The Giant Blunderbuss; Or, The Wheel And Exe Fight ; Tom The Giant, His Wife Jane, And Jack The Tinkeard, As Told By The "drolls" ; How Tom And The Tinkeard Found The Tin, And How It Led To Morva Fair; The Giant Of Morva; The Giant Bolster; The Hack And Cast; The Giant Wrath, Or Ralph; Ordulf The Giant; The Fairies; The Elfin Creed Of Cornwall; Nursing A Fairy; Changelings; The Lost Child; A Native Pigsey Story; The Night-riders; The Fairy Tools; Or, Barker's Knee; The Piskies In The Cellar; The Spriggans Of Trencrom Hill; The Fairy Miners--the Knockers; The Spriggan's Child, As Told By A Cornish Droll; The Piskies' Changeling; The Pixies Of Dartmoor; The Fairy Fair In Germoe; St. Margery And The Piskies; The Fairy Revels On The "gump", St. Just; The Fairy Funeral; The Fairy Revel; Bet Ty Stogs And Jan The Mounster; The Four-leaved Clover; The Fairy Ointment; How Joan Lost The Sight Of Her Eye; The Old Woman Who Turned Her Shift; The Fairy Widower; The Small People's Gardens; St. Levan Fairies; The Adventure Of Cherry Of Zennor; Anne Jefferies And The Fairies; The Piskie Threshers; The Muryans' Bank ; Romances Of Tregeagle; The Demon Tregeagle; Jahn Tergagle The Steward; Dosmery Pool; The Wish Hounds; Cheney's Hounds; Romances Of The Mermaids; Morva Or Morveth; Merrymaids And Merrymen; The Mermaid Of Padstow; The Mermaid's Rock; The Mermaid Of Seaton; The Old Man Of Cury; The Mermaid's Vengeance ; Romances Of The Rocks; Cromlech And Druid Stones; The Logan Or Loging Rock ; Mincamber, Main-amber Or Ambrose's Stone; Zennor Colts; The Men-an-tol; The Crick Stone In Morva; The Dancing Stones, The Hurlers, &c; The Nine Maids, Or virgin Sisters; The Twelve-o'clock Stone; The Men-scryfa; Table-men. The Saxon Kings' visit To The Land's End; Merlyn's Prophecies; The Armed Knight; The Irish Lady; The Devil's Doorway; Piper's Hole, Scilly; The Devil's Colts, &c; King Arthur's Stone; The Cock-crow Stone; Romances Of Lost Cities; Lost Lands; The Tradition Of The Lyonesse Or Lethowso W; Cudden Point And The Silver Table; The Padstow "hobby-horse" ; St Michael's Mount--the White Rock In The Wood; Gwavas Lake; The City Of Lancarrow Or Langona; The Sands At Lelant And Phillack; "the Island," St. ives; The Chapel Rock, Perran-porth; Romances Of Fire Worship; Fire Worship; Baal Fires; The Garrick Zans, Or Holy Rock; Fire Ordeal For The Cure Of Disease; Burning Animals Alive; Demons And Spectres; The Hooting Cairn; Jago's Demon; Peter The Devil; Dando And His Dogs; The Devil And His Dandy-dogs; The Spectral Coach; Sir Francis Drake And His Demon; The Parson And Clerk; The Haunted Widower; The Spectre Bridegroom; Duffy And The Devil; The Lovers Of Porthangwartha; The Ghost Of Rose Warne; The Suicide's Spearman; The Suicide's Ghost; The "ha-af" A Face; The Warning; Laying A Ghost; A Flying Spirit; The Execution And Wedding; The Lugger Of Croft Pasco Pool; Legends Of The Saints; The Crowza Stones; The Longstone; St Sennen And St Just; The Saint And Johana; The Saint's Path; The St. Leven Stone; The Two Breams; Saint Keyne; St. Dennis's Blood; St. Kea's Boat; St. German's Well; How St. Piran Reached Cornwall; St. Perran, The Miners' Saint; The Discovery Of Tin; St. Neot, The Pigmy; St. Neot And The Fox; St. Neot And The Doe; St. Neot And The Thieves; St. Neot And The Fishes; Probus And Grace; St. Nectan's Kieve And The Lo

His father, naval officer, was drowned while Robert was a youth. He began to study in London for the medical profession, but ill-health caused him to return to the west of England.

In 1829, he published The MountÔ€™s Bay; a descriptive poem ... and other pieces but received little critical or financial success.

In 1840 he became secretary to the Royal Cornwall Polytechnic Society at Falmouth. Here he was brought into contact with Robert Were Fox, and carried on some physical and chemical investigations with him.

He took up photography with great zeal, following Daguerre's discovery, developed the actinograph and introducing business processes. His Manual of Photography (1841, ed. 5, 1857) was the first English treatise on the subject. He also experimented generally on the action of light, and published Researches on Light (1844).

In 1845 he accepted the invitation of Sir Henry de la Beche to become keeper of mining records at the Museum of Economic (afterwards Practical) Geology, and when the school of mines was established in 1851 he lectured for two years on mechanical science, and afterwards for a short time on experimental physics.

He was elected a Fellow of the Royal Statistical Society in 1855.

In 1858 he founded, with the Royal Cornwall Polytechnic Society, The Miners Association.

His principal work was the collection and editing of the Mineral Statistics of the United Kingdom, and this he continued to the date of his retirement (1883), when the mining record office was transferred to the Home Office.

He was elected fellow of the Royal Society in 1854. In 1884 he published a large volume on British Mining in which the subject was dealt with very fully from an historical as well as a practical point of view. He also edited the fifth and some later editions of Ure's Dictionary of Arts, Mines and Manufactures. He died in London on October 17, 1887. A mineralogical museum at Redruth Mining School was established in his memory, this closed in 1950 and the minerals were transferred to the School of Metalliferous Mining now the Camborne School of Mines.

He also collected..." (Quote from wikipedia.org)