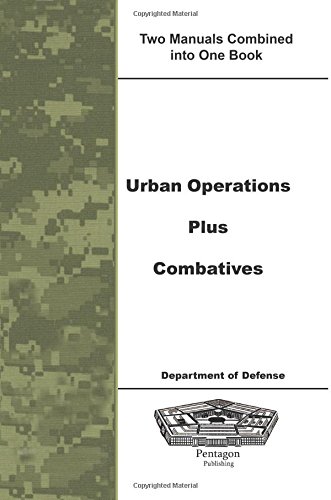 A great value! Two military manuals combine into one book. If you purchase both books separate you will pay more for the books plus shipping cost. Urban Operations: This manual provides the analytical tools for evaluating an urban operation to determine if the operation is necessary for overall mission success. It also provides the means to understanding and determining the impacts of the urban environment on military operations and provides information on managing, taking advantage of, and mitigating the effects of those impacts as appropriate. Chapter Contents: The Urban Outlook; Understanding the Urban Environment; Understanding the Urban Threat; Understanding the Urban Environment's Effects on Warfighting Functions and Tactics; Contemplating Urban Operations; Foundations for Urban Operations; Urban Offensive Operations; Urban Defensive Operations; Urban Stability and Civil Support Operations; Urban Sustainment; Appendix: Siege of Beirut: An Illustration of the Fundamentals of Urban Operations; An Urban Focus to the Intelligence Preparation of the Battlefield; Operations in Somalia: Applying the Urban Operational Framework to Stability Operations; Joint and Multinational Urban Operations. Combatives: Today's battlefield scenarios may require silent elimination of the enemy. Unarmed combat and expedient-weapons training should not be limited to forward units. With rapid mechanized/motorized, airborne, and air assault abilities, units throughout the battle area could be faced with close-quarter or unarmed fighting situations. With low-intensity conflict scenarios and guerrilla warfare conditions, any soldier is apt to face an unarmed confrontation with the enemy, and hand-to-hand combative training can save lives.