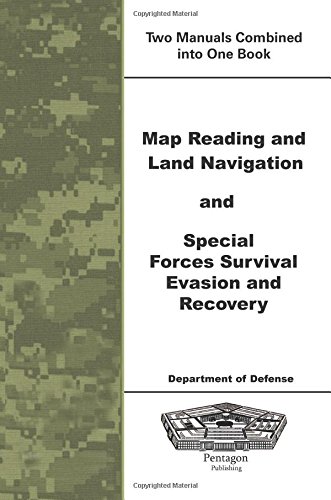 A great value! Two military manuals combine into one book. If you purchase both books separate you will pay more for the books plus shipping cost. Map Reading and Land Navigation: Institution courses are designed to prepare the soldier for a more advanced duty position in his unit. The critical soldiering skills of move, shoot, and communicate must be trained, practiced, and sustained at every level in the schools as well as in the unit. The map reading and land navigation skills taught at each level are critical to the soldiering skills of the duty position for which he is being school-trained. Therefore, they are also a prerequisite for a critical skill at a more advanced level. Special Forces Survival Evasion and Recovery: EVASION, NAVIGATION, RADIO COMMUNICATIONS AND SIGNALING, RECOVERY, MEDICAL, PERSONAL PROTECTION, WATER, FOOD, INDUCED CONDITIONS, THE WILL TO SURVIVE.