Items related to Cod: A Biography of the Fish That Changed the World

Kurlansky, Mark Cod: A Biography of the Fish That Changed the World

Cod: A Biography of the Fish That Changed the World 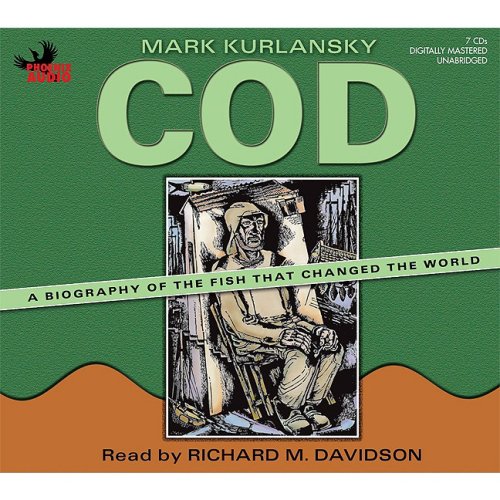 "A loving eulogy not only to a fish, but to the people whose lives have been shaped by the habits of the fish, and whose way of life is now at an end."--New York "Newsday." Unabridged. 7 CDs.

To make the history of a fish interesting, invigorating and moving is an almost impossible feat that Mark Kurlansky accomplishes fantastically well in this compact, learned, beautifully written gem of a book. Cod traces humankind's involvement with what was once one of the world's most plentiful foodstuffs. The Basque people, who Kurlansky suggests found America before Columbus, could only fish and forage (for whale meat) as far as they did because of the huge schools of cod they found, caught and salted as they went. Centuries before this Vikings had travelled from Norway across to Canada--the exact range of the Atlantic cod. Interspersed with old and forgotten recipes Cod becomes a fitting requiem to a fish no-one believed would ever become scarce nor become such a telling metaphor for our careless treatment of the sea, its bounty and our wider environment. --Mark Thwaite

"A must-have book for anyone who loves fish. Kurlansky was innovative (and is now much imitated) in writing a book about how a commodity shaped history." (The Week)

"This is an extraordinary little book, unputdownable, written in the most lyrical, flowing style which paints vivid pictures and, at the same time, punches into place hard facts that stop you dead in your tracks. Who would ever think that a book on cod would make a compulsive read? And yet this is precisely what Kurlansky has done" (Sir Roy Strong Express on Sunday)

"To go out and buy a book on the subject (of cod) is to invite glances of suspicion. While a few eccentrics might think this is a good reason to purchase several copies, for the rest of us it requires a certain leap of faith. Cod...amply rewards such a leap. It is compact and beautifully produced" (Mail on Sunday)

"Refreshing and invigorating, full of fascinating facts" (Independent on Sunday)

1. Cod: A Biography of the Fish That Changed the World

2. Cod: A Biography of the Fish That Changed the World (Audio CD)