Items related to Rodeo - Travellers' Tales collected by the Great... 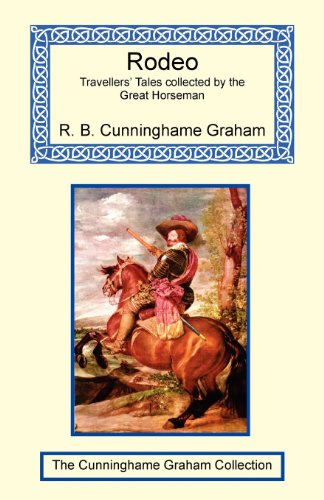 This is an omnibus of the finest work of the man they called “the uncrowned King of Scotland.” The stories canter across a wide vista, ranging from the rolling pampas of Argentina to the cruel cities of Europe. They are inhabited by the characters whom Don Roberto knew, ranging from mysterious Moroccan sherifs to dying Sioux chiefs. As if to add a hint of equestrian history, “Rodeo” was edited by Aimé Tschiffely, the most famous Long Rider of the 20th century and a close personal friend of Don Roberto’s. H.G. Wells, Joseph Conrad, Teddy Roosevelt, Oscar Wilde and George Bernard Shaw, all praised Don Roberto as being one of the greatest writers of their day. An enduring literary monument to a life well lived, “Rodeo” remains a classic literary treasure.

Book Description The Long Riders' Guild Press, 2004. Condition: Good. A+ Customer service! Satisfaction Guaranteed! Book is in Used-Good condition. Pages and cover are clean and intact. Used items may not include supplementary materials such as CDs or access codes. May show signs of minor shelf wear and contain limited notes and highlighting. Seller Inventory # 159048178X-2-4