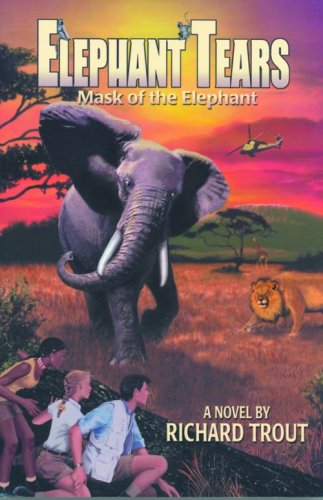 In this second novel in the "MacGregor Family Adventure" series, zoologist Dr. Jack MacGregor again strives to protect the earth's dwindling resources and endangered animals, this time by pursuing an international cartel that is exploiting elephants in East Africa. The family's three teenagers, Chris, Heather, and Ryan, become part of the action and help their father find a solution. They team up with native Africans and a seasoned American aviator to save the animals and bring the exploiters to justice. Readers learn environmental issues as they follow the adventures and keen insights of the teens in this fast-paced thriller and they see how the MacGregor teenagers grow in discipline, self-reliance and respect for other cultures.

"Respectfully depicts the native Africans and their tradition without glossing over their problems."

"Trout has written a tale for young people the way it should be written."
-Clive Cussler, best-selling author

Praise for Elephant Tears: Mask of the Elephant:

"An action-packed journey for young adults through the trials and triumphs of wildlife conservation in the African bush."
-Dr. Delia and Mark Owens, zoologists and authors of Cry of the Kalahari, The Eye of the Elephant, and the National Geographic film African Odyssey

"Teens who enjoy the Discovery Channel and Animal Planet, and young adults who thrive on outdoor adventure and action stories, won't be able to put Elephant Tears down until they've read it all the way through."
-Gottawritenetwork.com, True North

"Portrays the teens' relationships with each other and with their parents as wholesome but realistic ... respectfully depicts the native Africans and their tradition without glossing over their problems."
-VOYA, Leah Sparks

"The author weaves an exciting adventure while stressing the importance of protecting the earth's dwindling resources and endangered animals. It is a powerful, enlightening, exciting novel."
-KLIATT, Sherri Forgash Ginsberg

"Action-filled thriller that you will want to read for the excitement factor as well as gaining a lot of insight into the problems of wildlife survival."
-Northwest Metro Times, "Kids Books," Dale Knowles

In Book Two in the MacGregor Family Adventure Series, Dr. Jack MacGregor, once again in pursuit of protecting earth's diminishing resources and endangered animals, arrives in East Africa and collides with an international cartel that is exploiting elephants. Meanwhile, the MacGregor teens, Chris, Heather, and Ryan, and their friend Rebecca, a Kikuyu native, are unwittingly thrust into the battle to save the elephants alongside a veteran American aviator who is out to bring the poachers to justice.

Book Description Pelican Pub Co Inc, 2006. Condition: Good. Former Library book. Shows some signs of wear, and may have some markings on the inside. Seller Inventory # GRP79243138

Book Description Pelican Pub Co Inc, 2006. Condition: Good. Shows some signs of wear, and may have some markings on the inside. Seller Inventory # GRP9732691

3. Elephant Tears : Mask of the Elephant

Book Description Arcadia Publishing. Paperback. Condition: As New. An apparently unread copy in perfect condition. Dust cover is intact; pages are clean and are not marred by notes or folds of any kind. At ThriftBooks, our motto is: Read More, Spend Less. Seller Inventory # G1589803248I2N00