Items related to All Quiet on the Western Front (Sparknotes)

Erich M Remarque All Quiet on the Western Front (Sparknotes)

All Quiet on the Western Front (Sparknotes) 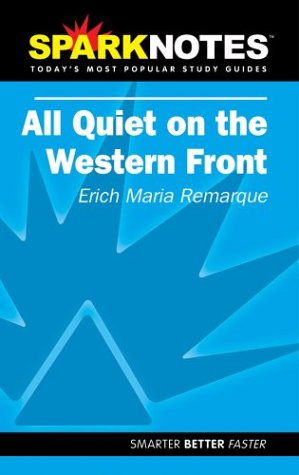 "Get your "A" in gear! They're today's most popular study guides-with everything you need to succeed in school. Written by Harvard students for students, since its inception "SparkNotes(TM) has developed a loyal community of dedicated users and become a major education brand. Consumer demand has been so strong that the guides have expanded to over 150 titles. "SparkNotes'(TM) motto is "Smarter, Better, Faster because: - They feature the most current ideas and themes, written by experts. - They're easier to understand, because the same people who use them have also written them. - The clear writing style and edited content enables students to read through the material quickly, saving valuable time. And with everything covered--context; plot overview; character lists; themes, motifs, and symbols; summary and analysis, key facts; study questions and essay topics; and reviews and resources--you don't have to go anywhere else!

There are some books that should be read by every generation... Remarque's story of German trench soldiers of the 1914-18 war gains even more authority in the context of the loss of life in wars that still rage (Chris Searle )

The book conquers without persuading, it shakes you without exaggerating, a perfect work of art and at the same time truth that cannot by doubted (Stefan Zweig )

Erich Maria Remarque became known internationally after the publication of All Quiet on the Western Front in 1928/9. Exiled from Nazi Germany he lived in America and Switzerland. He died in 1970.