Items related to Business and Legal Forms for Photographers (Business... 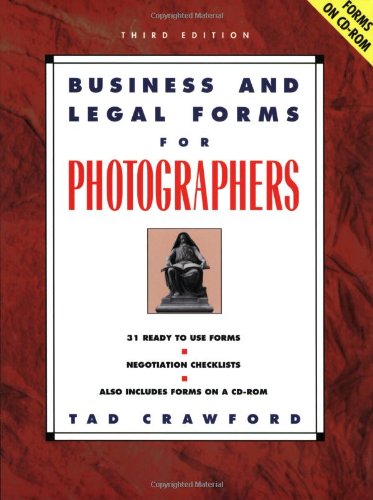 Here's the classic "bible" of forms and checklists for every situation a professional photographer may face. Thoroughly expanded and updated to cover the Internet, this brand-new Third Edition contains 28 forms, each ready-to-use as is, or easily tailored to fit any situation. Photographers will find contracts for wedding, portrait, and assignment photography; property and model releases, assignment estimates, confirmations, and invoices; delivery memos; license for Web usage; nondisclosure agreements; and much, much more. An accompanying CD-ROM provides electronic versions of these forms, ready to use on both Macs and PCs.
"Every photographer needs this book. If you don't add this book to your library you may regret it later; this one I consider indispensable."
—Shutterbug.
"Crawford has created what is probably the most complete book of forms for photographers who work in commercial, editorial, stock, wedding, fine art, even video. His contracts are safe, easy-to-use, and cover all the bases."
—ASMP Newsletter.

Tad Crawford is President and Publisher for Allworth Press in New York City, which he
founded in 1989, studied economics at Tufts University, graduated from
Columbia Law School, clerked on New York State’s highest court,
and represented many artists and arts organizations when he actively
practiced as an attorney. He has authored more than a dozen books on
business, including The Secret Life of Money: How Money Can Be Food
for the Soul. The legal affairs editor for Communication Arts
Magazine, he has written articles for magazines such as Art in
America, Glamour, Harper's Bazaar, Lapis, The Nation, New Age Journal,
and Self. He has also appeared as a guest on television programs
such as Fox on Money; The O’Reilly Report; Good Day, Wake Up;
and It’s Only Money as well as numerous radio shows including
New York & Company. He lives in New York City.

Expanded and updated to cover the Internet, this volume contains 28 business and legal forms for photographers. Each form is accompanied by step-by-step instructions, advice on standard contractual provisions, and negotiation checklists to guide you to the best deal. There are: contracts for wedding, portrait and assignment photography; publishing, collaboration and licensing contracts; property and model releases; assignment estimate/confirmation/invoice; delivery memo; stock photography invoice; stock agency agreement; permission form; copyright registration and transfer forms; nondisclosure agreement; license of rights; license of electronic rights; license for Website usage; Website design contract; and more. The book is accompanied by a free CD-ROM which contains electronic versions of each form.

3. BUSINESS AND LEGAL FORMS FOR PHO

4. BUSINESS AND LEGAL FORMS FOR PHO