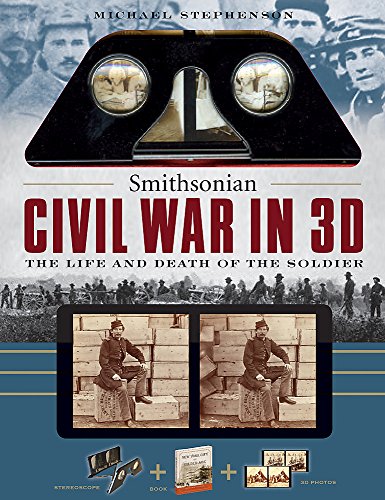 A collection of 35 stereoscopic photographs and sturdy metal viewer provide a remarkable and highly realistic 3D view of the daily life of soldiers during the American Civil War. Images will include building winter quarters, preparing food in the mess hall, bathing in a river in Virginia, waiting at the depot to be transported to the front lines, building roads, following the wagon trains from battle to battle and recuperating from wounds in hospitals. Detailed descriptions of the scenes depicted in the photographs are included on the back of each card. The kit includes an accompanying 176-page paperback book, The Civil War: The Life and Death of the Soldier, by Michael Stephenson that tells of the war from the soldiers? perspectives from both sides of the Mason-Dixon line. What they ate, where they slept, how they filled the long hours while waiting for the next battle to start and other aspects of their gritty existence are detailed. Letters and diary entries are included and a timeline of the war puts the experiences described into context.

Smithsonian Institution is the most visited museum complex in the world, with more than 30 million annual visitors. Michael Stephenson is an editor, military historian and the author of numerous books.

1. Smithsonian Civil War in 3D: The Life and Death of the Solider

2. Smithsonian Civil War in 3D: The Life and Death of the Solider