Items related to A Youth in Babylon: Confessions of a Trash Film King

Friedman, David F. A Youth in Babylon: Confessions of a Trash Film King

A Youth in Babylon: Confessions of a Trash Film King 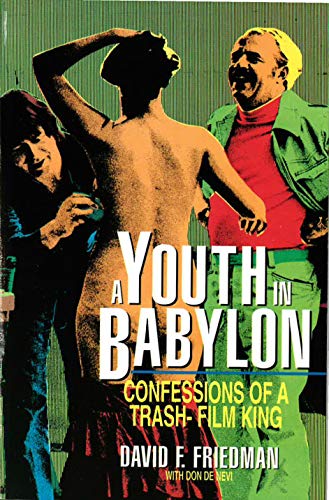 They sold sin and sensation with the magic words "Uncut! Uncensored! Adults Only!" and the most happily shameless of them all was David F Friedman, the emperor of "exploitation" films. Friedman perfected the fine art of sleaze and delightfully admits that he has hurled more garbage at the public than anyone else before or since. This book is as much his story as it is the history of an idea that in recent times has enjoyed a remarkable rebirth. Friedman writes with gusto of the glory days when there were taboos to be broken and untold amounts of money to be made. He fondly remembers his cinematic forebears, who sold titillation under the guise of moral instruction.Friedman brought the genre to new highs (and lows), producing such films as "She Freak", "Blood Feast", "The Defilers", "Scum of the Earth", "Space Thing", "Color Me Blood Red", and the classic "Two Thousand Maniacs". Whether sexy, gory, or merely shocking, these films played for years to packed theatres and drive-ins. This book captures the core of basic integrity, the wicked sense of humour, and the unerring sense of showmanship of this American original.

"A Youth in Babylon" is the definitive book on the history of American "exploitation" films and a unique contribution to motion picture history. About the Author:

Don DeNevi is the author, coauthor, or editor of thirty-five books, including Profilers: Leading Investigators Take You Inside the Criminal Mind and Into the Minds of Madmen: How the FBI's Behavioral Science Unit Revolutionized Crime Investigation (both with John H. Campbell).

1. A Youth in Babylon: Confessions of a Trash-Film King