Items related to The Nature of the Gods and on Divination (Great Books... 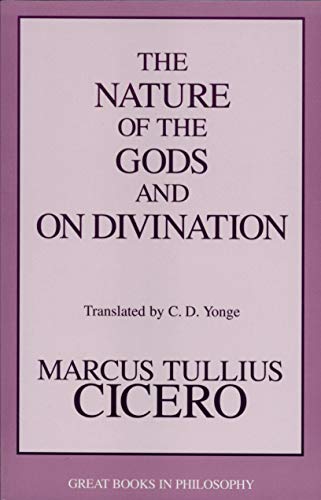 In The Nature of the Gods, the eminent Roman statesman and philosopher Marcus Tullius Cicero (106-43 b.c.e.) analyzes the positions of the Stoic, Epicurean, and Academic schools on the existence and nature of the gods, and whether they act in the interests of humankind. Cotta, the Academic spokesman, criticizes his Epicurean and Stoic interlocutors for their failures, respectively, to account for human freedom and for the accidents and evils that occur in life. Lacking sure knowledge of what gods are, human beings are left to their own intelligence and natural abilities to make their way in an uncertain world.

In the dialogue of On Divination, Cicero and his brother, Quintus, examine various sorts of divination on Stoic principles, which Quintus upholds. Cicero counters that there is no such "science" of divination, and that the ambiguities and absurdities inherent in oracles, prodigies, and dreams preclude any divine agency. They are, rather, the result of natural phenomena or coincidence.

Marcus Tullius Cicero (106 - 43 BCE) was a Roman statesman, lawyer, orator, scholar, and writer. He served as consul in the year 63 BC. It was during his consulship that the second Catiline conspiracy attempted to overthrow the government through an attack on the city by outside forces, and Cicero suppressed the revolt by summarily executing five conspirators. During the chaotic latter half of the first century BCE, marked by civil wars and the dictatorship of Julius Caesar, Cicero championed a return to the traditional republican government. Following Caesar's death, Cicero became an enemy of Mark Antony in the ensuing power struggle. He was proscribed as an enemy of the state by the Second Triumvirate and subsequently executed.

Along with Lucretius, Cicero helped introduce philosophic writing to Rome and forged a new Latin philosophical vocabulary. His mastery of language firmly established him as a model of Latin prose for later ages. Petrarch's rediscovery of Cicero's letters is often credited for initiating the fourteenth-century Renaissance in public affairs, humanism, and classical Roman culture.

1. The Nature of the Gods and on Divination (Great Books in Philosophy)

2. The Nature of the Gods and on Divination (Great Books in Philosophy)

3. The Nature of the Gods and on Divination

4. THE NATURE OF THE GODS AND ON DI

5. The Nature of the Gods and on Divination (Great Books in Philosophy) [Paperback] Cicero, Marcus Tullius and Charles Duke Yonge