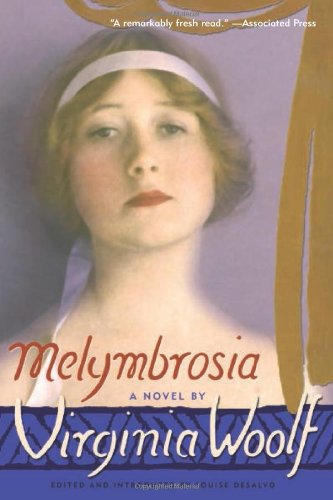 "DeSalvo's newly edited version of Woolf's first novel gives us a fresh look at an important modernist writer...a vision of Woolf's first novel as she would have preferred it." - Bloomsbury Review "This book is a remarkably fresh read, and is something contemporary readers can easily relate to. By uncovering this important volume, DeSalvo has made a significant contribution to literature." - Associated Press"

MELYMBROSIA, written between 1909 and 1912, was never published. Instead, three years later, Virginia Woolf published her first book, The Voyage Out, a heavily revised and considerably toned down version of this, her original work. Discovered seventy years later and published in a private scholarly edition (300 copies), MELYMBROSIA was culled from over one thousand manuscript pages over a seven-year period, where seven separate drafts were matched and reordered according to paper type, ink and handwriting, among other considerations. Now, available for the first time to the book trade, Virginia Woolf's first attempt as a writer reveals a far angrier, starker, more feminist and explicitly lesbian perspective than that of The Voyage Out. Comparable to Stephen Hero, the predecessor to James Joyce's A Portrait of the Artist as a Young Man, this rediscovered novel offers extraordinary insights into Woolf's life as a young woman, bisexual and artist as well as the political limitations of the time period. Its long-overdue publication represents a landmark event for feminists, academics and fans alike.