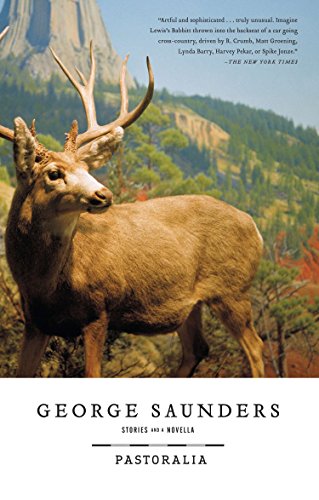 A stunning collection including the story "Sea Oak," from the #1 New York Times bestselling author of the Man Booker Prize-winning novel Lincoln in the Bardo and the story collection Tenth of December, a 2013 National Book Award Finalist for Fiction.

Hailed by Thomas Pynchon as "graceful, dark, authentic, and funny," George Saunders gives us, in his inventive and beloved voice, this bestselling collection of stories set against a warped, hilarious, and terrifyingly recognizable American landscape.

In both his acclaimed debut, CivilWarLand in Bad Decline, and his second collection, Pastoralia, George Saunders imagines a near future where capitalism has run amok. Consumption and the service economy rule the earth. The Haves are grotesque beings, mutilated by their crass desires and impossible wealth. The Have Nots are no less crippled, both emotionally and physically, by their inferior status. It's a kind of Westworld scenario, but instead of robots, the serving wenches, bellboys, and extras are real people, all of them mercilessly indentured by the free market.

Sounds like bleak stuff, doesn't it? Yet Saunders handles his characters with grace and humour In the title story, for example, a couple occupies a squalid corner of a human zoo, where they act out a parody of caveman times, communicating in grunts and hand motions speaking is instantly punishable by the Orwellian management) and conducting their lives during 15-minute smoke breaks. In "Winky", a born loser (really, all of Saunders's characters are born losers) visits a self-help seminar, where he's encouraged to rid himself of all those people who are "crapping in your oatmeal". Exhilarated at the prospect of dumping his simple, crazy-haired, religion-besotted sister, he returns home to the bleak discovery that he needs her as much as she needs him. The protagonist of "Sea Oak" works as a stripper in an aviation-themed restaurant and lives next to a crack house with his unemployed sisters, their babies, and a sweet old maid of an aunt. The aunt dies, and then returns from the grave--not so sweet, now, and still decomposing--with strange powers and a sobering message:

"You ever been in the grave? It sucks so bad! You regret all the things you never did. You little bitches are going to have a very bad time in the grave unless you get on the stick, believe me!"

The characters and situations in the rest of Pastoralia are equally wretched. But Saunders rescues them from utter despair with a loving belief in the triumph of the human spirit: yes, things can always get worse, but worse is better than the cold dirt of the grave. And in the small space between wretchedness and death there is plenty of room for laughter, and even love. --Tod Nelson

"Saunders is a provocateur, a moralist, a zealot, a lefty, and a funny, funny writer, and the stories in Pastoralia delight. We're very luck to have them." --Esquire "Intoxicating." --Time Out

"Demands to be reread immediately" --The Wall Street Journal

"Hilarious and heartrending" --The Village Voice

"Saunders is a provocateur, a moralist, a zealot, a lefty, and a funny, funny writer, and the stories in Pastoralia delight. We're very lucky to have them." --Esquire

"Breathtaking, brutally hilarious satire, a savage skewering not only of the American workplace, but of the American character itself. . . . Pastoralia is a masterpiece of unsettling comedy." --San Diego Union Tribune

"The short-story collection of the year . . . Pastoralia does everything a gathering of tales is supposed to do: It touches the reader but also provokes reflection, mirth, and pain." --Kansas City Star

"Dazzling . . . Saunders's misfits confront their degradations with heroic optimism; rarely have the comic nuances of suffering been tracked with such precision. These stories, injected with Saunders's highly original blend of irony and tenderness, ride you down spirals of the absurd and fling you back to your own life, startled." --Men's Journal

"A master of distilling the disorders of our time into fiction." --Salon

"Fiercely funny . . . [Saunders is] a master of the self-flagellating interior monologue." --The Boston Globe

Book Description Paperback. Condition: New. Paperback. Hailed by Thomas Pynchon as "graceful, dark, authentic, and funny," George Saunders now surpasses his New York Times Notable Book, CivilWarLand in Bad Decline, with this bestsell.Shipping may be from multiple locations in the US or from the UK, depending on stock availability. 208 pages. 0.254. Seller Inventory # 9781573228725