Items related to Book of Serenity: One Hundred Zen Dialogues 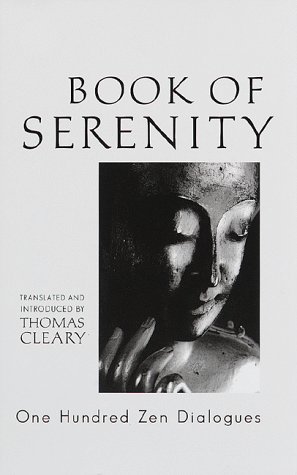 Book of Serenity is a translation of Shoyo Roku, a collection of one hundred Zen koans with commentaries that stands as a companion work to the other great Chinese koan collection, The Blue Cliff Record (Pi Yen Lu). Both works are classics of Chan (Chinese Zen) Buddhism—and both have now been rendered into English by the renowned translator Thomas Cleary. Compiled in China in the twelfth century, the Book of Serenity is, in the words of Tenshin Reb Anderson, "an auspicious peak in the mountain range of Zen literature, a subtle flowing stream in the deep valleys of our teaching, a treasure house of inspiration and guidance in studying the ocean of Buddhist teachings." Each of the hundred chapters begins with an introduction, followed by the main case, or koan, taken from Zen lore or Buddhist scripture. Then follows commentary on the main case, verses inspired by it, and, finally, further commentary on all. The book contains a glossary of Zen/Chan terms and metaphors.

"Thomas Cleary has translated a medium-sized library of classic texts of Buddhism, Taoism, and I Ching studies, and the Book of Serenity is a major contribution to his already staggering body of work."--Sam Hamill, Tricycle

Thomas Cleary holds a PhD in East Asian Languages and Civilizations from Harvard University and a JD from the University of California, Berkeley, Boalt Hall School of Law. He is the translator of over fifty volumes of Buddhist, Taoist, Confucian, and Islamic texts from Sanskrit, Chinese, Japanese, Pali, and Arabic.