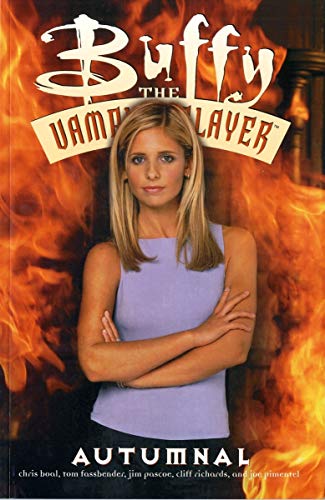 Buffy is being stalked by a creature intent on killing her so that it can bring about the end of the world. So, what else is new? The only person who can save her is a Slayer who should have died a long time ago. Confused? Well, so are Buffy and the gang. If that's not weird enough, what's she to make of a backpack full of maggots? How about a herd of rats that overrun the cafeteria just as she's sitting down to eat? Just how much can Buffy take before she gets totally grossed out?

Joss Whedon was born in New York City in 1964. He started out as a staff writer for the 1990s sitcom Roseanne and worked on films, including Toy Story. In 1992 he penned the script for a film, Buffy the Vampire Slayer, and when the TV version starring Sarah Michelle Gellar took off in 1997, Whedon had his big break—with its female action heroine, Buffy, became a huge hit. Whedon wrote hundreds of episodes for Buffy and its spin-off Angel, and was nominated for Emmy and Hugo awards for his work. Whedon has come to enjoy a cult following. The author lives in Santa Monica, California.

Cliff Richards is a comic book artist known for Buffy the Vampire Slayer, Angel and Faith, Dollhouse, Ghost, Spike, and Wonderwoman. Richards was born in Brazil.

In two tales from the comic-book series, Buffy first is assisted by a slayer from the eleventh century to defeat the creature Karfarnaum, and, in the second, follows a trail of maggots and rats to a showdown in the cemetery.

Book Description Trade Paperback. Condition: New. Mockingbird Books has two brick and mortar used book stores located in Sebastopol and Guerneville California. We carefully inspect all our books for condition. You can trust our listing is accurate and all our offerings are correctly assessed. Seller Inventory # 116572