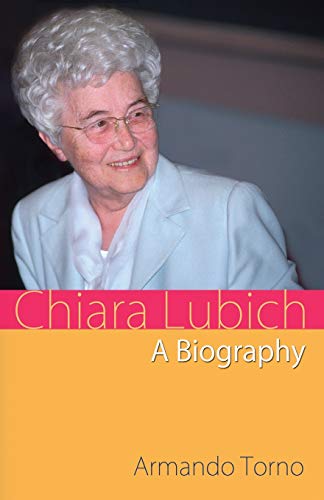 The New York Times called Chiara Lubich "one of the most influential women in the Catholic Church." This biography transports readers inside the story of a young woman, born to a poor family in Trent, who felt called to dedicate her life to God. Against the backdrop of the devastation of the Second World War, Lubich shared her passion first with a group of young women her age. Torno presents a forthright account of Chiara Lubich and her friends' collective mystical experience and their resulting life, both profoundly spiritual and deeply human, which always aimed at fulfilling Jesus' prayer "that all may be one." By the 1960's, her inspiration had reached every corner of Italy and spread throughout Europe, behind the Iron Curtain, and around the world. Wherever she went - from the jungles of the Cameroon, to the favelas of Rio de Janeiro, to the skyscrapers of New York, to the Buddhist monasteries of Chiang Mai, Thailand - she shared her choice of God and the lifestyle it generated. This biography brings to life those people Chiara met along the way - from everyday folk to political leaders to popes - and describes how her charism affected each one. He reveals the challenges that arose as a vast movement grew up around Lubich as well as her joy at seeing authentic gospel life spread around the world. Together, they achieved what Chiara defined as " - the great attraction of modern times: to penetrate to the highest contemplation while mingling with everyone." Chiara Lubich was an extraordinary woman, but she was more than that; she inspired and led an extraordinary religious movement, but she was more than that as well. Chiara Lubich was the embodiment of the values of Love and Unity that she espoused; which live on after her not only in the remarkable Focolare movement itself, but in the hearts and souls of people of faiths and cultures worldwide, touched by her spirit. Rabbi David Rosen, CBE, KSG International Director of Interreligious Affairs, AJC

Armando Torno has edited the cultural pages of Italy's Il Sole 24 Ore and Corriere della Sera. In addition to his many years of journalistic work, he has published fifteen books.

"Chiara Lubich is a moving story for biography collections focusing on important figures in the Catholic Church."
The Midwest Book Review

1. Chiara Lubich: A Biography (A Spirituality of Unity)