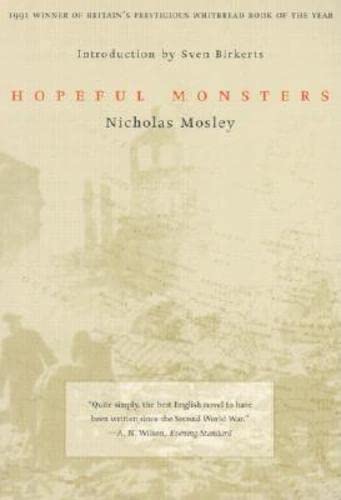 -- A sweeping, comprehensive epic, Hopeful Monsters tells the story of the love affair between Max, an English student of physics and biology, and Eleanor, a German Jewess and political radical. Together and apart, Max and Eleanor participate in the great political and intellectual movements which shape the twentieth century, taking them from Cambridge and Berlin to the Spanish Civil War, Russia, the Sahara, and finally to Los Alamos to witness the first nuclear test.
-- Hopeful Monsters received Britain's prestigious Whitbread Award in 1990.
-- Praising Mosley's ability to distill complex modes of thought, the New York Times called Hopeful Monsters a virtual encyclopedia of twentieth century thought, in fictional form.
-- First U.S. edition by Dalkey Archive ('90), most recent paperback by Vintage ('93).

Book Description Dalkey Archive Press, 2000. Paperback. Condition: New. 1st. Paperback. Hopeful Monsters, winner of the Whitbread Award, is a tour de force of intellect and eros--one in which Albert Einstein taunts a lecture hall full of Nazis and Ludwig Wittgenstein is an aw.Shipping may be from multiple locations in the US or from the UK, depending on stock availability. 550 pages. 0.603. Seller Inventory # 9781564782427